People of the Sky

All of the People of the Sky have grass skirts as their body clothing and have light-colored skin. Each of the main People has a distinct appearance with their own golden pendant with a different gemstone on each:

The People of the Sky lived happily until Queen Sectonia became a tyrant. Before their imprisonment, the fairies dropped the Dreamstalk seed down to Dream Land in the hope that it would lead a hero to save them.

The People of the Sky are first seen imprisoned in Stage 5 of Royal Road. Kirby must release them in order to unlock a huge locked door. There are five main Sky Fairies needed to unlock the final door, and there are secondary people that give Kirby 3D Warp Stars to venture through the stage.

They are apparently strong enough to carry large objects. After Sectonia causes the Dreamstalk to grow out of control, they bring Kirby and King Dedede a cannon to blast through the vines. Kirby's house, as during the game's climax a small group can be seen carrying Kirby and his home down to Dream Land.

Official Kirby Twitter
Add a photo to this gallery

An imprisoned Person of the Sky

A generic Person of the Sky

The six main People of the Sky

The People of the Sky bring Kirby and Dedede a cannon.
Add a photo to this gallery 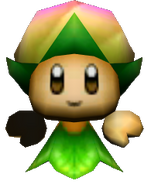 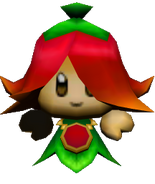 Kirby: Triple Deluxe
Add a photo to this gallery
Retrieved from "https://kirby.fandom.com/wiki/People_of_the_Sky?oldid=330725"
Community content is available under CC-BY-SA unless otherwise noted.