Pengi[citation needed] (also spelled Pengy) is an enemy in the Kirby series. It gives the Ice ability when inhaled.

Pengy is a small, blue penguin-like creature. It has a large yellow beak with a throat pouch that extends over most of its front. Pengy's stomach is white, while its back is blue. A pair of flippers hang at the enemy's sides, and it features yellow feet that resemble those of Kirby.

The newer design as of Kirby: Nightmare in Dream Land is nearly identical to the old one, with the addition of white, spiky eyebrows. This design has remained consistent with all subsequent games Pengy has appeared in.

Pengy appears as an enemy in these games. It slides around short distances on its belly as it waits for Kirby to draw near. When he does, Pengy rears back briefly before releasing a stream of icy breath that can freeze Kirby. It is not advised to inhale Pengy while it is attacking, as its breath has longer range than Kirby's inhale.

Pengy appears as an enemy in these games. Its appearance and behavior have not changed since Kirby: Nightmare in Dream Land. In Kirby: Squeak Squad, Pengy no longer rears back before attacking, making it more difficult to anticipate the attack.

Pengis appear as guest characters in the episode The Chill Factor. They are lead by a bushy-eyed master. The Pengis show up one summer day in Cappy Town, bringing with them cold weather and driving everyone insane. Their plan is unveiled when Tiff, Tuff, and Kirby discover a giant storm-generating machine hidden inside the Pengis' glacier. Apparently, the Pengis were displaced and driven out of their natural habitat because of global warming, leading them to emphatically want revenge on the Cappies. They are intent on overtaking Cappy Town and creating a perpetual, year-round winter. With his cover blown, the lead Pengy goes on a rampage, freezes everyone in the town, and incarcerates them.

When Kirby and the gang escape and confront the lead Pengy in Castle Dedede, he challenges Kirby to a fight and begins using his frost breath to attack. Kirby inhales some of his attacks and becomes Ice Kirby. The two are evenly matched, and it takes the combined efforts of King Dedede, Escargoon (who order a mysterious potion from Nightmare Enterprises), and Tiff (who summons the Warp Star from Kabu) to help Kirby drive the Pengis off. Kirby flies to Booma-Dooma Volcano and pours the concoction into it, causing it to erupt and warms up Dream Land, at which point the Pengis decide to look for another new place to live.

The main Pengy is voiced by Nobuo Tobita in Japan and Mike Pollock in English.

Pengy's name comes from the word for penguin. 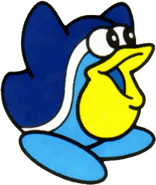 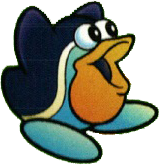 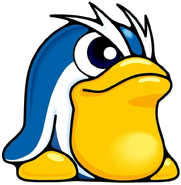 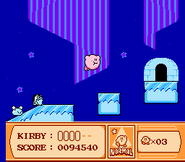 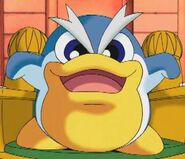 The leader of the Pengis

Kirby Mass Attack
Add a photo to this gallery
Retrieved from "https://kirby.fandom.com/wiki/Pengi?oldid=326230"
Community content is available under CC-BY-SA unless otherwise noted.