Patch Land is the main setting of the game Kirby's Epic Yarn. It is a planet within viewing distance of Planet Popstar.

Patch Land is made out of seven pieces of land. They are Quilty Square, Grass Land, Hot Land, Treat Land, Water Land, Snow Land and Space Land. Yin-Yarn the sorcerer separated all seven pieces of Patch Land as part of his plan to take over Dream Land. Although Prince Fluff seems to hold a degree of responsibility over Patch Land, his roles are not explained, and if the King and Queen of Patch Land exist, they are never introduced.

Kirby ends up in Patch Land after mistaking Yin-Yarn's Metamato for a Maxim Tomato. Naturally, Kirby inhales the tomato just as Yin-Yarn starts to introduce himself and ends up being sucked into an angry Yin-Yarn's magical sock, which is a portal to Patch Land. Kirby eventually teams up with Prince Fluff and the two put an end to Yin-Yarn's plans after travelling back to Dream Land.

Kirby's Epic Yarn wallpaper
Add a photo to this gallery 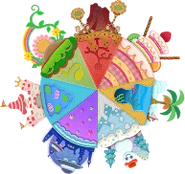 Kirby's Extra Epic Yarn
Add a photo to this gallery
Retrieved from "https://kirby.fandom.com/wiki/Patch_Land?oldid=316786"
Community content is available under CC-BY-SA unless otherwise noted.