None, but holds a red and white parasol with a blue handle and a bright yellow star on top.

Floats slowly downwards. Protects from attacks in the direction the parasol is facing

Parasol is one of Kirby's Copy Abilities that has appeared in numerous Kirby games, first seen in Kirby's Adventure.

Parasol is a deceptively simple, harmless looking Copy Ability that allows Kirby to use a red and white-striped (except in Kirby's Dream Course, where it is green and white), star-tipped parasol as a weapon. It can slow his fall from high places, and protect his head from most attacks or falling objects. Kirby can also swing the parasol in front of him to attack enemies, and in some games, can hold it out indefinitely. However, Parasol's attacks are rather weak compared to those of other abilities, making it difficult to use offensively.

While Parasol began as a defensive ability, it has actually received multiple offensive upgrades throughout the Kirby games. In Kirby Super Star, Parasol gained a powerful throw; in Kirby: Squeak Squad, the Ability Scroll for Parasol made Kirby able to fire a short-ranged beam of star-like projectiles from the tip of the parasol when held. In Kirby's Return to Dream Land, many of Parasol's moves gained invincibility frames, and it also gained an extremely fast, grounded, multi-hit attack. This ironically made it one of the most damaging abilities against grounded enemies in that game, though the damage of this move was heavily toned down in Kirby: Triple Deluxe and Kirby: Planet Robobot.

Parasol is one of the few abilities that may presently be used in water. Ironically, though, in Kirby's Dream Land 3, it was the only ability that could not be used underwater, where Kirby would put away his Parasol and attack by instead blowing bubbles, as if he had no ability. Kirby's Dream Land 3 was also the only game in which Parasol did not slow Kirby's fall by itself, effectively making the ability only useful for defeating enemies on land.

In Kirby: Planet Robobot, if one taps in the Kirby series Waddle Dee amiibo, then Kirby will obtain an exclusive costume for Parasol, turning his body redish orange, while turning his feet orange, and putting on a blue bandana resembling Bandana Waddle Dee.

In Kirby Star Allies, Parasol can be used to imbue the water element, in order to become Friend Abilities. In addition, it can be used solo to create the Chumbrella, a larger parasol which can protect from falling obstacles.

In certain games, like Kirby's Dream Land 3, Kirby may not be holding the Parasol over his head when he enters a new room, gets hurt or enters water, and will therefore be unable to use the Drift and Shield abilities until he attacks with it, after which he will hold it over his head.

After finishing this move, Kirby retracts the Parasol and holds it behind him briefly. During this time, the Parasol does 16 damage passively. 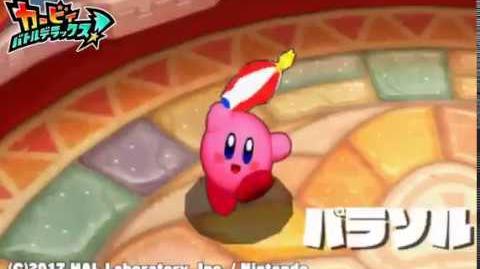 Like Stone, Parasol is a very useful ability in that it will instantly halt Kirby's mid-air trajectory, allowing him to drop directly onto an enemy or into a hole without needing to precisely calculate a shot. However, it is less reliable than Stone, as Kirby will slowly drift forward on his parasol after activation, rather than dropping straight down. He can be guided to a limited extent by holding left or right on the D-pad, which will rotate him counterclockwise or clockwise respectively. If used on the ground, it has a braking effect similar to Needle, though less pronounced.

Parasol Kirby in Kirby: Right Back at Ya! is most like the version from Kirby Super Star, with several of the same attack—namely Parasol Swing and Parasol Shield, in addition to Parasol Grab and Throw, which he uses on King Dedede.

Cappy New Year marked the ability's first appearance. Kirby acquired it by inhaling Sasuke. In this episode, Kirby did not use Parasol in battle, but instead used it only to slow his fall from high up in the air.

The ability's last appearance was D'Preciation Day, where Kirby used it to destroy Chuckie. 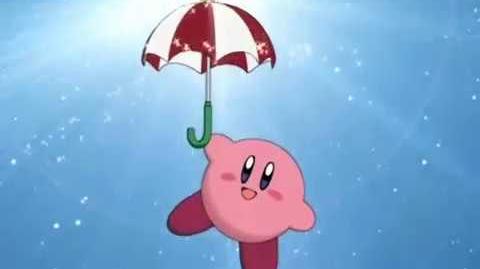 In the transformation sequence, Kirby lands atop his parasol. It spins, making Kirby dizzy, and he gets off. Kirby then takes the Parasol, which floats down to him. 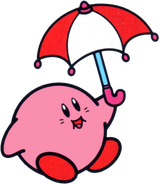 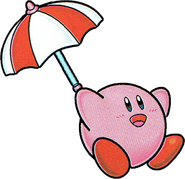 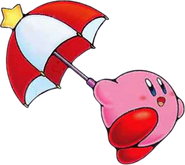 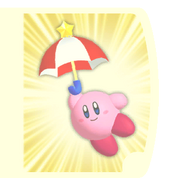 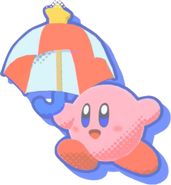 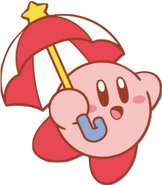 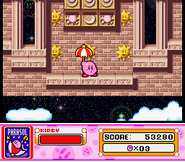