Parallel Susie is a character in the Kirby series, debuting as a boss in Team Kirby Clash Deluxe, but would eventually become an ally in Super Kirby Clash. She is the Another Dimension counterpart of Susie.

Parallel Susie looks very similar to her counterpart, except with a few key differences. Her helmet, hair, and mech have a black and red color scheme, and her skin is slightly paler. Unlike her counterpart, she lacks an accessory in her hair. During battle, she fights without her blue visor for the first phase. The Haltmann Works Company logos on her mech are replaced with a logo resembling an eye; this logo is also present on King D-Mind's hammer, suggesting that she may be affiliated with him.

As President Parallel Susie, she now has gray skin and silver hair. Her eyes have turned turned hot pink, and she wears a rose suit with a hot pink skirt. The sleeves on her hands are also rose, and she wears silver gloves. She also now has a rose visor.

After many battles, Team Kirby defeats Taranza, the mage who has been causing bosses to attack Dream Kingdom, and peace is briefly restored to the land. This is cut short when a dimensional rift opens, releasing Parallel Susie. Narration later reveals that Taranza, who only feigned defeat, was responsible for summoning the rift and opponent. Shortly after her defeat, another dimensional rift opens up, forcibly sending her back to where she came from and also releasing Parallel Landia.

Parallel Susie is fought at the Decisive Battlefield after being unlocked for 120 Gem Apples. She is an Ordeal boss in the Tougher category and must be defeated before the player can access Parallel Landia. She attacks using some of Susie's techniques from Kirby: Planet Robobot. These primarily include jumping around, spinning her mech's arms, striking the ground from the background to produce shock waves, and firing missiles into the air.

Ordeal Boss
Parallel Susie returns as a boss in Super Kirby Clash in the Decisive Battlefield for 35 Gem Apples. She has the same moveset as her fight in Team Kirby Clash Deluxe. She is defeated by Team Kirby and is sent back into a dimensional rift.

After her first defeat, Parallel Susie would return once again in the Dreamscape, this time as Pres. Parallel Susie. In this form, her attack patterns have become quite faster and more erratic. She achieved this form after wandering through dimensions and gaining power, as well as becoming the president of what is presumably a parallel version of the Haltmann Works Company. However, like last time, she is defeated and sent back through a dimensional rift.

After defeating both Super: Pres. Parallel Susie and Super: Parallel Nightmare's Revenge, Parallel Susie somehow finds her way back in the dimension of the Dream Kingdom. However, she has reverted to her normal colors, and instead of attacking Team Kirby, she becomes a resident of the Castle Village. She can be seen sitting on top of the Shoppe.

Parallel Susie is sucked into a dimensional rift.

Parallel Susie is dragged back into a dimensional rift.

Parallel Susie sits atop the Shoppe.

Pres. Parallel Susie is pulled back through a dimensional rift.
Add a photo to this gallery 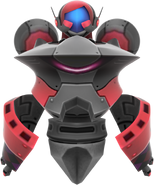 Team Kirby Clash Deluxe
Add a photo to this gallery
Retrieved from "https://kirby.fandom.com/wiki/Parallel_Susie?oldid=346593"
Community content is available under CC-BY-SA unless otherwise noted.