Kirby Wiki
Register
Don't have an account?
Sign In
Advertisement
in: Articles with non-canonical information, Characters, Articles under construction,
and 12 more
English

Parallel Nightmare is a character in the Kirby series, debuting as the main antagonist of Super Kirby Clash. He is the Another Dimension counterpart of Nightmare.

Parallel Nightmare's Power Orb form is a sphere with a dark blue upper half and a light blue lower half, and it is covered in red stars.

Parallel Nightmare has gray skin and disembodied hands with long, skeletal fingers. He has a pointy nose, a rather large chin, and a mouth with sharp teeth that's almost always in an evil grin. He wears a pair of red crescent moon-like shades over his eyes. He wears a black cape with red stars on it. The interior of his cape appears to be a night sky full of stars. He wears a necklace with a crescent moon on it, and four red pauldrons. He also wears a red back piece and a red headpiece. The headpiece has two black, curved horns, and a black front with three orange gems. Lastly, he has a tornado-like body.

In his Revenge form, his skin is slightly darker. His cape is now tattered and black with a slight reddish, fiery aura, and the interior is a red sky. His four pauldrons, backpiece, and headpiece are now purple. The furthest pauldrons on his left and right are slightly broken, with pieces floating beside them. His left horn is also broken with pieces floating above it. The left part of his shades is shattered, revealing his red eye, blazing with red electricity. His tornado-like body is also covered in red electricity.

After clearing some quests, Team Kirby hears rumors of a strange, caped man. Thinking that this man may be causing mischief, they set out to look for him. They arrive at The Ruins, where they encounter Parallel Nightmare. Parallel Nightmare attacks Team Kirby, but is defeated and flees to The Volcano. Team Kirby chases after him through rumors while completing more quests.

After mistaking Taranza for him, Team Kirby finally tracks Parallel Nightmare down to The Empyrean. They do battle with him once more and defeat him, but he flees once again, this time to the Decisive Battlefield.

After a few days of peace and quiet, an onslaught of monsters appear. Thinking Parallel Nightmare is behind this, Team Kirby sets out to look for him after hearing rumors that he was seen near the Castle Village and The Grasslands. After clearing more quests, they come across the Dreamscape, where Parallel Nightmare happens to be. Soon after defeating President Parallel Susie, they encounter Parallel Nightmare in his Revenge form, who had given up on ruling the Dream Kingdom in favor of exacting revenge on Team Kirby. They do battle one last time, and Team Kirby comes out on top. However, Parallel Nightmare rises back up from below, and as a last resort, opens a portal and summons the Aeon Hero. Parallel Nightmare's Revenge wickedly laughs at Team Kirby's impending doom, but is interrupted midway through by the Aeon Hero slicing him. He then screams as he dissipates, seemingly putting an end to him.

Parallel Nightmare's moveset mostly consists of Nightmare's attacks from Kirby's Adventure and Kirby: Nightmare in Dream Land. He can open up his cape to shoot five stars in different directions, swoop from one side of the arena to the other along the ground, shoot a line or an onslaught of stars from his fingers, and shoot stars from the palms of his hands. He has a different attack as well, where he moves around the arena as his tornado-like body swirls around, damaging those who come in contact. He can also teleport around the arena.

During his fight in The Empyrean, Parallel Nightmare gains attacks from Nightmare's battle in the Strato Patrol EOS sub-game in Kirby Mass Attack, including creating orbs of energy that slowly move in different directions and explode upon hitting the ground, as well as firing lasers from his hands directly below him, finishing off with two lasers at once. When furious, Parallel Nightmare will teleport to the center of the arena and will charge up as he gets closer to the ground. Then, his body becomes a massive tornado that pulls in the player, forcing them to run in the opposite direction.

In his Revenge form, after he moves around the arena while his body swirls around, Parallel Nightmare will sometimes rise into the air at the center of the arena and drop back down. He can also now fire shots of three stars from the background before swooping in. He has various other changes as well, such as shooting more stars from the palms of his hands, creating an additional orb of energy, and firing more lasers, while also having a quicker charge time. During his massive tornado attack in later Revenge battles, Parallel Nightmare will create it at one side of the arena and slowly move towards the other side. In his final Revenge fight, the orbs Parallel Nightmare creates will occasionally circle around him before homing in on a random player. Additionally, when rising up into the air, he will fake out the player and stop midway down, right before dropping down on the opposite side. 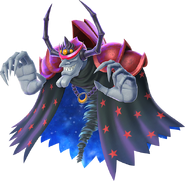 Parallel Nightmare enters as in his Power Orb form.

Parallel Nightmare drops from the sky.

Parallel Nightmare drifts across the stage.

Parallel Nightmare fires a laser from his hand.