Kirby Wiki
Register
Don't have an account?
Sign In
Advertisement
in: Articles with non-canonical information, Enemies, Characters,
and 8 more
English

Parallel Landia is a boss in the Kirby series, debuting in Team Kirby Clash Deluxe. He is the Another Dimension counterpart of Landia.

Parallel Landia looks identical to Landia except in color. He has a navy blue color scheme with yellow eyes, blue and yellow striped horns, and blue wings with golden claws and lighter blue membranes. The crown on his head is black with a red gemstone.

Identically to Landia, he gains red eyes and splits into four separate dragons on his second phase.

Parallel Landia is first fought in the Decisive Battlefield after being unlocked for 150 Gem Apples. He is an Ordeal boss in the Tougher category and must be defeated before the player can access The Final Battle.

Parallel Landia uses the same attacks as Landia, but they are more powerful. These moves include spitting fire, shooting shock waves, tail whipping, swooping at Team Kirby, and splitting into four dragons, among other techniques.

While not appearing in the main Story mode, Parallel Landia appears as a Super category Party Quest boss in the Decisive Battlefield that is unlocked for 58 Gem Apples. He retains his moveset from Team Kirby Clash Deluxe. 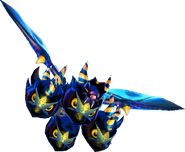