Parallel Dedede is a boss in the Kirby series, debuting in Kirby Star Allies. He is the Another Dimension counterpart of King Dedede.

Parallel Dedede appears identical to King Dedede except in color. He has gray skin, has a purple beak, feet, gloves, and trimming around his cap. His robe, cap, eyes, and hammer are black, with his pupils being red along with the star on his hammer. His obi is black and yellow instead of yellow and red.

Parallel Dedede’s origin is told in his Pause Screen description. It is stated that when the Jamba Heart shard which took possession of King Dedede was expelled, it went back to Hyness in The Divine Terminus. The shard was then cast away into Another Dimension along with King Dedede’s own thoughts, creating Parallel Dedede as a result. Together with Parallel Woods, Parallel Kracko, and Parallel Meta Knight, they are known as “The Otherworldly Four Kings,” which is not in the English localization.

Parallel Dedede is fought in Dimension IV of the Heroes in Another Dimension sub-game, serving as the fourth boss and a more difficult version of King Dedede, with the boss title of Otherworldly Dark Liege.

In the first phase, he shares the same attacks with King Dedede, but they are quicker and deal more damage. He uses his Inhale attack more often than the regular one, and his Super Dedede Jump now produces shock waves, similarly to Masked Dedede's Revenge and Shadow Dedede. Also, similarly to Masked Dedede, if Parallel Dedede uses his Hammer attack in midair, it will produce a shock wave. Unlike King Dedede, Parallel Dedede can perform the Gordo Throw attack from King Dedede’s moveset in the Super Smash Bros. series: he launches three Gordos which bounce across the area before colliding with the wall.

In his second phase, Parallel Dedede becomes muscular, much like original King Dedede in the main story mode. After that, he roars and destroys the floor, dropping Kirby and his friends on the floor below. Parallel Dedede pummels the ground in front of him with his fists, but he does that much quicker than his main mode counterpart, and just like him, he leaves a boulder after the attack, which can be inhaled for the Stone ability. He can also throw piles of rotten food which can be cleansed into fresh food with the Water ability or Splash element attacks, but he also throws Gordos along with the food piles. He retains his Super Dedede Jump attack, but it produces bigger shock waves. He can also curl himself and bounce on the ground many times. And finally, he can jump on the wall before charging up and ricocheting from the walls multiple times and finishing the attack with trying to dive bomb into players, similarly to Goriath.

Parallel Dedede grabs food and prepares to throw it. 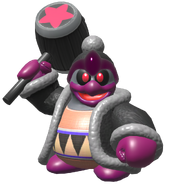