Paintra is a colorful sorceress and the boss of Kirby: Triple Deluxe’s second level, Lollipop Land. She was merely a painting before Taranza disturbed her, and she materialized from her frame and attacked Kirby.

Paintra has the same basic appearance of Drawcia: both being limbless and wizardly-looking creatures with large hats and colorful clothes.

Paintra wears a red wizard hat with a wide rim, a white-ish green cloth around it, and a long, pointed top. There are what seem to be yellow flowers on the hat, as well. She has curly pink hair, a dark brown face, and yellow eyes. Under her eyes is a tightly wrapped, blue piece of clothing, held there by a yellow button in the middle. Paintra has a red and orange lined coat with fluffy red brims, and she wears a purple vest, with two yellow buttons underneath it. Paintra's "legs" resemble the tip of a paintbrush split in two. The left tip has red and yellow on it, while the other has blue and green on it. For some of her attacks, Paintra will combine her legs to form an actual paintbrush tip under her body.

In Dededetour, Paintra DX looks exactly the same as her Main Mode counterpart, the only differences being her hat's shape and her overall color scheme. Unlike the red hat Paintra had in Main Mode, Paintra DX wears a crooked black hat which looks similar to that of a witch. The cloth that is wrapped around the hat is red and is noticeably slanting towards the front. The yellow flowers that were on Paintra's hat have turned dark blue and are pointed at the ends, making them look like ears sticking out. Paintra DX has purple hair and eyes that are red instead of yellow. The cloth around her face and the button in the middle has swapped colors, meaning she has a yellow cloth held by a blue button. The red brims around her coat remains red, but the coat itself is lined with dark purple and light purple stripes. The two small buttons on her blue vest are blue and her "legs" remain the same.

Paintra can release three multicolored orbs, roughly the size of Kirby, at slight angles ahead of themselves, after briefly charging up. She floats around the arena, sometimes into the background so Kirby cannot attack her. She can release balls of paint from the background that will fall of random spots on the foreground floor, and also cover the screen with splashes or streaks of paint for a short time, obscuring the player's view. She will try to swipe at Kirby with her paintbrush-like bottom. This attack leaves an ability-less star each time she swipes. She can rain down a barrage of paint blobs on top of Kirby. If he is hit with this attack, it renders him unable to move until the attack ends. This attack leaves two stars.

After half her health is depleted, she releases a shrill laugh, identical to what she does at the beginning of the fight.

Paintra will summon empty picture frames into the background and paint large wrecking balls onto them. The frames will then float above Kirby, two of the balls will fall like actual wrecking balls. These balls being shiny in appearance. One floats slowly out of the third frame like paper, with the appearance of paper. The fake wrecking ball can be destroyed or inhaled. The two actual wrecking balls leave two stars once they hit the floor, but give no Copy Ability. She will then paint yellow spiked pillars onto the frames. Like the wrecking balls, two of the pillars are real with a shiny appearance, while one is fake like paper. The two real pillars will extend forward, while the fake one just flutters harmlessly out of its frame. Kirby cannot destroy or inhale that one. The two real pillars will then retreat back into their frames; each pillar leaving two stars when they do.

Paintra can even paint the four Landia dragons. Three of them will breath fire around them, while one falls harmlessly out of its frame. Kirby cannot do anything to that one. Lastly, Paintra can paint three portraits of herself. After she is done, the four Paintras will float together in an attempt to confuse the player, before separating. The real Paintra will soon set the fake three on fire, one by one, and they will each float around briefly before exploding.

Paintra can also summon a sheet of paper to fall over the background, separating her from Kirby. The player must the use her silhouette to determine where she is, and avoid her when she breaks through the sheet in an attempt to run Kirby through. Her silhouette will follow Kirby while she is behind the sheet, and when she breaks through, two stars appear. Paintra may perform this attack once to several times before the sheet is pulled back up. Paintra can also attempt to run Kirby through the same way she would when she is behind the sheet, only this time, the sheet is absent. This still leaves two stars, however.

In the first half of the fight, Paintra DX shoots seven multicolored orbs instead of three. She swipes her paintbrush-like bottom for a longer period of time as well. The sorceress shoots paint balls in the background like before, but she ends the attack by swiping paint blobs onto the screen. Her last updated attack is her barrage of paint blobs that she attempts to rain down on King Dedede; she now attempts to do the attack three times instead of two.

After half of her health is depleted, she adds a single streak of paint in the center of the screen, blocking the player's view. After that, she proceeds to paint a hazard behind the paint, whether it would be spiked wrecking balls or purple spikes that retreat quicker. Paintra DX paints Landia EX and her self portraits home in on Kirby before they explode. The streaks of paint effectively blocks the player's view and keeps him/her from seeing if the hazard in question is real or not. When she bursts through the canvas, she repeats does this four times in a row and moves around more instead of just bursting out in a straight line. She also gains a new attack, where she rapidly spins using her aforementioned paintbrush-like bottom as a sweep of sorts, and moves around the screen attempting to swipe King Dedede.

Paintra DX bursts through a canvas. 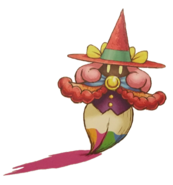 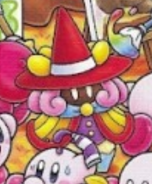