Various, Paint in the Anime

Paint Roller is a boss character who debuted in Kirby's Adventure. He appears in the game's remake, Kirby: Nightmare in Dream Land, and later appeared in a few other games. He is an artist on the go, and always wears a pair of roller skates to travel at high speeds. His body is an orange sphere with large round eyes and wears a hat atop his body. He has a giant paintbrush (sometimes misconstrued as a marker, pencil, or crayon) with him in all appearances. His name is based on the fact that he paints and wears roller skates. His power is identical to that of Ado, Adeleine, Drawcia, and Paintra—to instantaneously give life to his works of art. In most battles, he makes use of this to bring foes to life to attack Kirby. Some of his drawings even give Kirby a Copy Ability when eaten. He also appeared as a one-time foe in an episode of the Kirby: Right Back at Ya! alongside the Paint ability.

Most recently, Paint Roller has appeared on a card in the sub-game Card Swipe in Kirby Super Star Ultra.

In these games Paint Roller is given one of the pieces of the Star Rod by King Dedede in an attempt to save Dream Land from Nightmare. He is the boss of the second level, Ice Cream Island. He is fought in a large room made completely of jigsaw puzzle pieces with a mountainous scenery scribbled on it. In the original version the puzzle had swirls and musical notes on it instead. The arena has one paint-splattered floor, two platforms, and four canvases in each corner of the room.

Paint Roller will speed to one of the canvases and hastily scribble a drawing before sprinting off to another one. These drawings will suddenly come alive and go after Kirby before going off-screen. Kirby can either inhale and spit the paintings back at Paint Roller or (possibly) get an ability that differs depending on what the painting depicts. Colliding with Paint Roller results in being damaged, and avoiding him is particularly difficult because he moves extremely fast and the path he travels is randomized and thus virtually unpredictable. Paint Roller is vulnerable to attack while he is painting as well as when he is skating from canvas to canvas. In both versions of the game, Paint Roller has the same amount of health, and is defeated in six hits without an ability.

Paint Roller can draw a total of eight different things during the battle, each with a different degree of rarity; the Car and Nimbus being the most common and the Microphone and Kirby being the most rare. Each one give a different ability (sans the Waddle Dee and Kirby) when inhaled, but when shot back at Paint Roller as stars, they all deal the same amount of damage.

An easy (albeit rare) way to defeat Paint Roller is to wait until he draws a Microphone, and then inhale it to get the Mike ability. Unleashing all three megaphone attacks back-to-back will defeat him instantly.

Paint Roller is once again a boss in Kirby: Canvas Curse alongside Kracko and King Dedede, though the way he is fought is more like a sub-game. In Paint Panic, Kirby faces off against him by redrawing the things he paints on the touch screen. Bombers pursue Kirby in the game, so should the drawing prove too difficult for Kirby and thus take too long, the Bombers will catch up to Kirby and damage him. After recreating some drawings Kirby must enter a sort of passcode to continue. At the end of the sub-game, Kirby has the chance to enter one final, longer code that will defeat Paint Roller and his Bombers.

The cutscene before the fight suggests that this Paint Roller is just one of Drawcia's paintings brought to life and not the same one from Kirby's Adventure, although she could have just summoned him to fight Kirby. Many of the things that Paint Roller draws are pictures of well-known bosses, enemies, and items in the series. His sprites are edited versions of the ones used in Kirby: Nightmare in Dream Land.

Paint Roller has a spherical orange body, pink cheeks and large round eyes. He is always seen carrying around what appears to be a marker or paintbrush (and even a paint bucket in the anime) in his hands. He wears white roller skates with 4 small wheels on each blade. Official art and some in-game appearances both depict him with small black limbs, yet some sprites show him with no limbs. He also appears to always have his ring and middle fingers folded down with his index, pinky, and thumb extended outward, a sign which can mean a variety of different things, depending on the culture.

He wears a hat in all appearances, yet the color of his hat varies from game to game. In official art of Kirby's Adventure, his hat is divided into several white and yellow sections with a green brim. In Kirby's Avalanche, the hat keeps its sectioned design, but this time has red and blue stripes instead of yellow and white. His brim is also gray in the game, which would be used in games following. In his most recent appearances, he is portrayed wearing a pinkish-red hat with the same gray brim.

Paint Roller appears in the episode Dedede's Monsterpiece. In the episode, Dedede hires this monster to mess around with a museum of fine arts called the Great Area of Arts, a place dreamed-up by Tiff and endorsed by the King himself. Dedede isn't too big on art, so he orders Paint Roller from NME and lets him go there to make some art of his own. Paint Roller runs wild and Tiff is left heartbroken. Dedede was enjoying the whole thing until Paint Roller then paints a larger-than-life painting of him—which suddenly comes alive and nearly scares the king to death. When Paint Roller makes a laser gun and gives it to the painting of Dedede, Meta Knight arrives and melts it with a torch, and then explains that everything Paint Roller paints comes to life. Kirby then steps in and inhales one of Paint Roller's brushes, granting him the Paint ability. The two skate around the museum and duel by painting different objects in an attempt to trump the other's object. In the end, Paint Roller paints a ticking time bomb. Kirby, thinking ahead, paints a giant missile. The missile comes to life and homes in on Paint Roller and, more importantly, the bomb. The two collide in a calamitous explosion. Paint Roller, along with the museum, is destroyed in the blast. He is one of only five monsters to succeed in their mission, the others being Max Flexer, Hardy, Delivery Man, and Cold Virus, but they all end up defeated like Paint Roller.

Paint Roller has thin, black limbs in the anime, a detail that is sometimes ignored in some of the games. He also has a different looking paint brush. 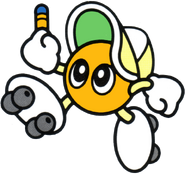