Paint is one of Kirby's rarest Copy Abilities, only found in Kirby Super Star and its remake.

Paint is a rare, one-use ability that lets Kirby spray blobs of paint all over, causing damage to any foe on screen. As a side effect, the behavior of two certain bosses will be changed when this power is used against them.

Kirby has obtained Paint in just one episode of Kirby: Right Back at Ya!, after inhaling one of Paint Roller's paint brushes. Along with the ability's standard hat, it also came with a pair of roller skates, which could be a reference to Paint Roller himself. Like Cook before it, it became a normal ability rather than a one-use ability, and allowed him to paint things that became real. This is similar to Adeleine. The episode's name is Dedede's Monsterpiece in the English dub of the Kirby TV anime. 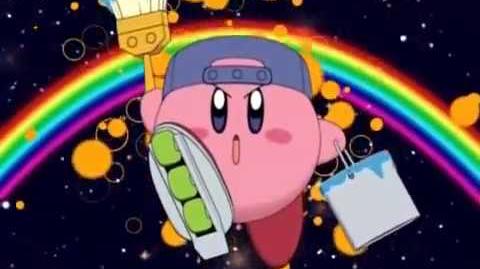 In the transformation sequence, Kirby dons the skates of Paint Roller. Next, a similar blue hat falls on Kirby's head. After, he takes out the paintbrush and skates across the screen and paints the screen in multiple colors, creating a rainbow. 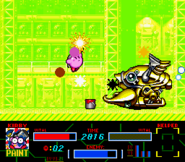 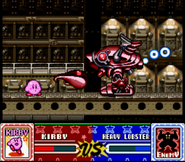 Heavy Lobster after being hit with Kirby's Paint