Orbservors are cycloptic orb creatures in Kirby Tilt 'n' Tumble. They serve as the game's only bosses, aside from Kracko and King Dedede.

Orbservor is a checkered sphere with a "slime-like body,"[1] one large eye, and elongated eyelashes (visible when blinking). Its distinguishing characteristics are its color patterns; the first is green and yellow, the second is brown, the third and fifth are gray, and the fourth is blue. Orbservor, especially the blue variant, greatly resembles the goal at the end of each stage.

Orbservors of different colors are encountered at the end of each level, with the exceptions of levels 3, 6, and 8. Each one attacks in a different way than the last. The first simply hovers around the arena, circling around and attempting to close in on Kirby. However, once hit, it spins around recklessly trying to hit Kirby. Kirby can use this time to find plenty of items to grab as well as safe spots to hide in. The second flies up and tries to fall on Kirby when hit. As it lands, it weakens the part of the floor it fell on and makes it collapsible. The third Orbservor, fought in level 4, closes its eye, making it impervious to Kirby's attacks. Once damaged, it spins around uncontrollably. If Kirby comes in contact with it while doing this, he will be rebounded, usually into spikes lining the walls. The observer in level 5 is fought on an ice-covered battlefield with little traction. The final Orbservor, fought in level 7, employs the tactics of each of the preceding ones. Its battlefield contains spikes and it will often close its eyes to stop Kirby from attacking.

Although each one has a different appearance and way of fighting, each one has the same weakness: its eye. Kirby must become airborne to ram into its eye. Each Orbservor has 3 hit points.

Orbservor is a portmanteau of "orb," referring to its shape, and "observor," referencing its eye. 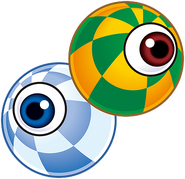 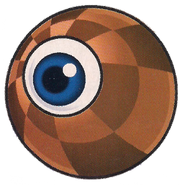