Orange Ocean is the sixth level of Kirby's Adventure and its remake Kirby: Nightmare in Dream Land. Meta Knight's base is located here.

While on the bow of a ship, Kirby looks out through a telescope at the sunset. However he soon loses his balance and falls into the water, where he promptly gets chased by a shark into the distance.

This intro is the same in both versions of the game. However in the remake Kirby is wearing a captain's hat.

Orange Ocean is an area of Dream Land named after its perpetual sunset and the orange glow that it casts on the water. The levels take place on the small islands in the sea as well as underwater levels in the orange water. Many of the level backgrounds are copies of background art from earlier levels, primarily Ice Cream Island, however with the colors changed to resemble the sunset. There are two parts of the ocean; part of it is warm and tropical, while the other half is completely frozen over (perhaps referencing its closeness to Rainbow Resort). The area between it is most likely Secret Sea, where the Halberd crashed. Orange Ocean is full of fleets of battleships and large pirate ships. Meta Knight acts as the boss of Orange Ocean in Kirby's Adventure and its remake. 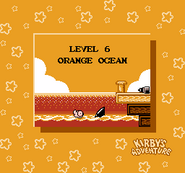 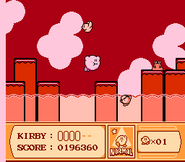 Explosive coconuts in this narrow passageway are hazardous.

A maze of clouds in front of the setting sun

Successfully solving a puzzle inside a pirate ship

A view over the orange sea

Even the sky is orange in Orange Ocean.