Octagon[1] is the first of many monsters that Kirby fights in Kirby: Right Back at Ya!, appearing in the very first episode, Kirby Comes to Cappy Town.

Octagon starts off as a little pink octopus with black dotted eyes minding his own business floating around in Dedede's royal fish tank. In his smaller form, those eyes are black dots, unless he stares into a potential victim's eyes, in which case he is using his hypnosis with his eyes glowing green.

When Octagon reveals his true form, he grows in size and appears similarly to a more menacing version of Flotzo. Octagon is so big he nearly dwarfs Dedede's castle. He has dark red skin and sunken in green eyes.

Octagon appears in his small form as one of Adeleine's paintings. He moves forward and then stops to grow in size when his eyes turn green, damaging any enemies.

In Kirby: Right Back at Ya!Edit

Before Kirby crash-lands on Dream Land, Dedede buys this little guy as a pet and keeps him in a tank in the throne room. In the beginning, sheep from Dream Land's pasture occasionally go missing. As time goes on, the disappearances become much more frequent and bones are found scattered throughout the fields. It soon becomes apparent that Dedede's "pet" is responsible for these mysterious disappearances. Octagon grows to epic proportions and starts going on a rampage in Castle Dedede. Apparently, Dedede did not even know that Octagon was doing these actions or even growing bigger to eat, as he tried to file a complaint to Nightmare Enterprises due to the fact that, despite ordering a giant octopus monster, he "ended up with a wimp." Octagon later placed Dedede under mind control to kill Kirby, although said mind control was broken after the brainwashed Dedede ran into a pillar. When he saw the size of Octagon, he also demanded for his manservant, Escargoon, to contact Nightmare Enterprises and fetch his pocketbook so he could demand a refund. With Dedede's castle becoming destroyed by the titanic octopus the Cappies seemed hopeless. But the Star Warrior inhales Octagon's mini flaming octopuses and becomes Fire Kirby—marking the first ability seen in the series. Kirby lets loose a stream of fire and destroys Octagon by causing his head to explode and sending him into a far part of the sky, with Dedede being pretty sad as now he can't get his refund.

Despite being one of the first monsters to appear in the series, Octagon has many different powers, in his first form he can swim in the water and can gobble up sardines with one gulp, he also possesses strange hypnotic power as well, which he uses to make King Dedede attack Kirby, he can transform into his second form at will.

In his second form, Octagon can consume entire flocks of sheep, create hordes of smaller baby octopodes (that look similar to his first form) from the suction cups under his tentacles, as well as flaming octopodes. He also has the ability to launch fireballs from the suction cups on his tentacles, and is able to release fiery hot breath from his mouth. Octagon can utilize his tentacles for physical attacks, and is also shown to be able to levitate, despite his lack of wings.

Octagon refers to an eight-sided polygon, referencing him being an octopus and having eight tentacles.

His Japanese name, オクタコン (Okutakon), is a portmanteau of the word octopus, オクトパス (Okutopasu); and the Japanese word for octopus, タコ/たこ//蛸 (tako); with an n attached to the end.

Octagon in his first form.

The flaming octopuses Octagon attacks with.

Octagon rages.
Add a photo to this gallery 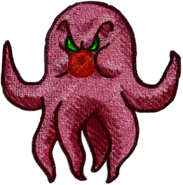 Retrieved from "https://kirby.fandom.com/wiki/Octagon?oldid=327437"
Community content is available under CC-BY-SA unless otherwise noted.