Kirby Wiki
Register
Don't have an account?
Sign In
Advertisement
in: Articles with derivative titles, Characters, Allies,
and 4 more
English

Nyupun is a character appearing in the game Kirby's Dream Land 3. Depending on the source/depiction, Nyupun is either ChuChu's best friend or her significant other. Nyupun is found in Sand Canyon's fifth level. If Kirby brings ChuChu to the end of the stage, Nyupun will reward him with a Heart Star.

Nyupun looks similar to ChuChu; however, Nyupun is yellow, sports a white sailor's hat with a pink ribbon, and has lighter-colored cheeks and round shaped brown eyes. In the Kirby's Dream Land 3 comic book, the hat is pink while the ribbon is magenta. 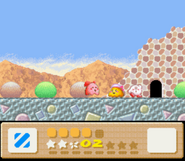