Kirby, all friends, all Dream Friends

The Normal Beam (called Suppin Beam in Kirby Super Star, also called Return Helper, referred to as Unfriend in Kirby Star Allies) is a move that allows Kirby to transform a Helper into its respective item. When used by Meta Knight, it is called Release.

The Normal Beam move debuted in Kirby Super Star and has since appeared in its remake and Kirby Star Allies.

In Kirby Super Star and its remake, the Normal Beam may only be used when Kirby has no Copy Ability. The move releases a beam of light directly to the left and right of the character using the move. The beam deals no damage and has no effect on enemies. If it touches a Helper, however, it will cause that Helper to rise in the air and flash for a moment before being replaced by an Ability Item which represents the Helper; this can be inhaled to give a Copy Ability. Only one Ability Item may be on-screen at one time.

In Kirby Star Allies, the Normal Beam returns, this time referred to as "Unfriend." It functions similarly to how it did in Kirby Super Star; however, three Ability Items may be on-screen at one time. Only one friend can be unfriended at one time. In this game, if a friend touches an Ability Item, it will transform into the friend that the item represents. Ability Items can also be turned into friends if a Friend Heart is thrown at it. Friends and Dream Friends can use the move in Guest Star ???? Star Allies Go! only.

The original (and Japanese) name, Suppin Beam, likely comes from the Japanese slang Suppin (素っぴん/すっぴん), which refers to someone who does not have make-up on. Suppin (すっぴん) is used in some of the Japanese games to note that Kirby does not have a Copy Ability; when Kirby doesn't have an ability in the English games, his status is usually displayed as "Normal," hence the name "Normal Beam." Thus, Normal Beam/Suppin Beam refers to a move, where Kirby releases a beam to both of his sides, that is only performed when Kirby is "Normal" or "Suppin." 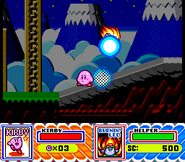 Kirby using the normal beam on a Capsule J2
Add a photo to this gallery
Retrieved from "https://kirby.fandom.com/wiki/Normal_Beam?oldid=334511"
Community content is available under CC-BY-SA unless otherwise noted.