Noo is an enemy that only appeared in Kirby 64: The Crystal Shards. It is a ghost that inhabits the ruins on planet Rock Star, peering out of holes in the walls and tossing fireballs at Kirby.

Noo is a transparent, white ghost-like enemy with spherical hands and a smiling face.

Noo only appears in Stage 2 of Rock Star in a dark room with the platforms that make an "X." It waits for Kirby to approach a black hole that it hides in. Once he comes close enough, Noo will toss blue-purple fireballs at him. Noos can be harmed, but it just counts as a stun, so therefore Noo can never be defeated. 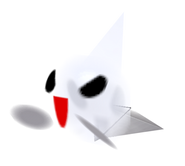