Himself, Nightmare Enterprises in the anime

Nightmare (eNeMeE in the English dub of the anime) is a wicked final boss character and major character in the Kirby series, despite only making three major appearances in the games. His goal is to spread dark nightmares and influences throughout the galaxy, and uses his cunning wit to accomplish the feat.

In his debut, Nightmare is responsible for corrupting the Fountain of Dreams and attempting to spread his nightmares all across Dream Land. King Dedede tries to stop Nightmare from succeeding by breaking the Star Rod, but Kirby unwittingly summons Nightmare when he returns the Rod to the tainted Fountain, and has to defeat Nightmare before his evil plans become reality.

Nightmare first rose to prominence in Kirby: Right Back at Ya!, securing the role of the show's main antagonist. He acts clandestinely behind the scenes through his company, Nightmare Enterprises, to attempt to take over Pop Star and conquer the known universe.

Nightmare has had notable appearances in Kirby's Adventure, its remake, and Kirby Mass Attack, and has been featured in a number of cameos in other games.

Nightmare initially manifests as a power orb. In this form, Nightmare is a dark sphere covered in silver, glowing stars. A gradient runs across the sphere: the top of the sphere is dark blue while the bottom is dark pink. In a number of early appearances and artwork however, the sphere is simply pitch black and colorless.

His real form is that of a wizard (though his Kirby's Adventure sprite slightly resembles Count Dracula) donned in a spinning, tornado-like robe. In the official art for Kirby's Adventure and the anime his robe is covered in stars just like in his first form. But in the actual games, Nightmare's cloak is simply a dark purple robe. On his face, he wears a pair of shades with a single black-chromed lens that flashes. Underneath his cloak lies his weak spot, a wildly-twisting accumulation of darkness. Above his robe, Nightmare wears silver pauldrons and a small red medallion around his neck (sometimes obscured by his chin in-game). In the games Nightmare has human-like teeth, while in the anime his teeth are sharp and jagged. According to official artwork from Kirby's Adventure, Nightmare has thin bony arms, though this characteristic was not included in later installments of the series except for the anime.

In Kirby: Nightmare in Dream Land, Nightmare's second form is slightly changed. He now has a total of four shoulder pads instead of just two, and much longer horns on his helmet. His chain and medallion are also now consistently visible during the fight. There are also two more jewels on his headpiece. This game's design also reflects a notable decision made to his size in Kirby: Right Back at Ya!, in which he dwarfs even the Halberd. In accordance to the show, he is also almost as tall as the screen now.

His design in Kirby Mass Attack takes a number of visual cues from his design in Kirby: Nightmare in Dream Land, though his shadowy cloak no longer conforms to the shape of his tornado-like core and instead bears more resemblance to the original shape of the cloak as seen in the Kirby's Adventure artwork.

Nightmare is a powerful entity that serves at the final boss in both Kirby's Adventure and its remake. In both games, he can only be defeated by the powerful Star Rod that Kirby collects in both games.

In these games, Nightmare takes control of the Fountain of Dreams in an attempt to extend his control over Dream Land. Trying to prevent this, Dedede breaks the Star Rod and scatters it around Dream Land, temporarily leaving Nightmare unable to take control and seems to trap him inside the Fountain of Dreams. Kirby, unaware of Dedede's intentions, restores the Star Rod and places it back in the fountain. With the Star Rod back in place, Nightmare reveals himself. Nightmare and Kirby then fly into space (Kirby did this with the help of Dedede).

In his initial orb form, Nightmare, for the most part, stays on the right side of the screen, shooting empty blue stars at Kirby. The fight is similar to the fight with Kabula in Kirby's Dream Land, but with a time limit, for the entire battle takes place in the planet's atmosphere as the two are falling to Pop Star's surface. As such, if Kirby doesn't deplete Nightmare's health bar in time, Nightmare will flee and Kirby will crash into the ground and lose a life. After the final blow is struck, Nightmare retreats and flies to Pop Star's moon. Kirby follows close behind on a Warp Star.

As Kirby pursues him, the power orb suddenly metamorphoses into his true form. After knocking Kirby from his Warp Star and onto the surface of the moon, Nightmare teleports in close to finish him off, effectively beginning the second phase of the battle. In his second form, Nightmare attacks Kirby by shooting stars at him, ramming into him, and using his tornado-like core to drill into him. He takes fewer hits to defeat than in his first form, but can only be damaged by hitting his weak spot, the accumulation of darkness at his core, which is usually protected by his impenetrable cloak. He briefly reveals his weak spot during each of his attacks. After Kirby lands the finishing blow, Nightmare's body explodes, destroying a huge portion of the moon as a result. After this, Kirby returns to the Fountain of Dreams, places the Star Rod back in there, and everything returns back to normal.

Nightmare himself doesn't appear in the game. However, his Power Ball form makes a minor cameo at the Fountain of Dreams stage.

In Kirby: Canvas Curse, Nightmare makes a cameo as a painting in Paint Panic. He is the hardest painting to draw, with a total of four stages.

In addition, Nightmare's battle theme from the previous game theme received a remix that plays in the penultimate stage in the game, Spectacle Space.

Nightmare appears in Kirby Mass Attack as the final boss of the Strato Patrol EOS sub-game. In his orb form, he attacks by teleporting around the area and firing stars and energy blades until he takes sufficient damage. In his second form, like in Kirby's Adventure and its remake, he only takes damage when his weak point is open. However this time around his attacks are almost completely changed. He commonly attacks by releasing energy orbs that follow the Kirbys until they disappear (he fires more orbs as he takes more damage). He also conjures pointed meteors to collide with them, but they can be destroyed before he even drops them. The meteors will also break up into smaller rocks when fired at, which the Kirbys must then avoid. Later in the battle, Nightmare will try to fire energy beams and star barrages at the Kirbys. His defeat animation parallels the one in Kirby's Adventure and its remake.

Likely because the Kirby anime was meant to coincide with the release of Kirby: Nightmare in Dream Land, Nightmare is the main antagonist in Kirby's anime series, despite actually appearing in only nine of the one hundred episodes. He is referred to as eNeMeE in the anime. Instead of attempting the conquest of Pop Star by corrupting the Fountain of Dreams, this version of Nightmare is intent on universal conquest through more direct, forceful methods. He is responsible for the creation of Nightmare Enterprises, which manufactures and sells hordes of monsters that Kirby often has to fight. It's implied that the monsters eventually turn on the customers as well. The money he makes from it also goes to further his conquest goals. There was a time when the Star Warriors and Galaxy Soldier Army stood in his way, but his army of monsters wiped them all out except Meta Knight, Kit Cosmos, Sir Arthur, Sir Falspar, Sir Dragato, and Sir Nonsurat.

It's mentioned by Kabu that Nightmare created one monster that didn't obey him, though who it is never stated. This is heavily implied to be Kirby, but it is possible that it might also be Meta Knight who also seems to hold a grudge against Nightmare, as Kirby wasn't even born yet while the great war was going on.

Nightmare has the ability to manipulate other peoples' minds, and even brainwash them. Just like in the games, he is also invulnerable to any other damage from anything but the Star Rod, as all other attacks are absorbed by the void underneath his cloak.

Nightmare rarely interacts with anyone and spends his time alone. Occasionally, Nightmare speaks to Customer Service concerning their business, but mainly exists as a mysterious figurehead of the company.

Throughout the series, Nightmare is seen simply watching Kirby and Dream Land, and never seems to take Kirby for a threat. He constantly watches Kirby fight his monsters that he sells to King Dedede. One of the few notable actions was when he sped up the rate of an asteroid that was heading for Dream Land, which he seemed to mostly just do for his own amusement, as well as putting money in his pockets from his best customer: King Dedede. For the bulk of the series though, Nightmare resides deep within his planet-sized fortress creating monsters.

Towards the finale, Nightmare seems to decide to end his amusement with Kirby and sends some of his Destroya ships to kill him, but this also fails. Nightmare responds by sending another six, but these are destroyed by Meta Knight's battleship, the Halberd. Even when the Halberd heads towards his fortress, Nightmare still doesn't take it for a threat and attempts to stop them with one last monster called Heavy Lobster.

This last ditch attempt fails, and the group (at this point consisting of Kirby, Tiff, Tuff, Meta Knight, Sword, Blade, a number of other Cappy Town residents, and other old friends of Kirby) manages to make their way into the fortress. During this time, Nightmare decides to finally confront them head-on. After a brief scuffle, Nightmare kidnaps Tiff to lure Kirby into a fight with him. Kirby takes the bait and, as Fire Kirby, tries to attack him, but his fire breath proves useless and he exhausts himself. With Kirby unconscious, Nightmare then enters his mind to torment him before finishing him off. Tiff, who also ended up in the dream, tosses Kirby a dream version of the Warp Star, which he swallows and gains the Star Rod ability—the only thing capable of damaging Nightmare. Kirby harnesses the power of the Star Rod and sends a wave of cascading stars at Nightmare, which destroys him forever.

Nightmare appeared to also be the real villain in the Kirby of the Stars Pilot and to be the one who actually sends all the monsters at Kirby. In the end, he appears to attack Kirby and his friends with some kind of energy beam before Kirby wakes up and realizes that it was actually a nightmare. His appearance in the pilot is based on his original design in Kirby's Adventure, with small shoulder pads, a single jewel on his crown, and short horns. 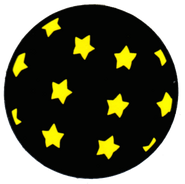 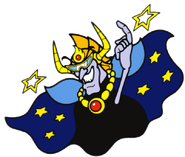 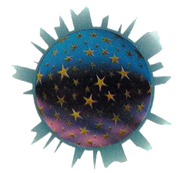 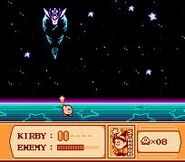 Kirby Mass Attack (Wizard)
Add a photo to this gallery
Retrieved from "https://kirby.fandom.com/wiki/Nightmare?oldid=177494"
Community content is available under CC-BY-SA unless otherwise noted.