Nekketsu is a samurai monster teacher that appears in episode 83 of Kirby: Right Back at Ya!, Teacher's Threat.

Nekketsu is sent by Nightmare Enterprises to deal with Kirby since Mr. Chip isn't up to doing anything to harm his students. Being a samurai, Nekketsu is shown to be skilled in swordplay, most notably that of any other samurai, and is also shown to be able to stretch his arms, too. After appearing from within a smoke bomb that King Dedede had carried back to the Dedede Academy school with him and then whacking Kirby around a bit with his bokken, Kirby sucked up Nekketsu's bokken and became Sword Kirby. Nekketsu then brings out a laser-like sword and the two engage in a sword duel. Kirby eventually ended the duel with two Sword Beams - the first time he used a Sword Beam, Nekketsu was able to block it, but the second time, the evil substitute teacher's attempt was futile. He was effortlessly sliced in half and destroyed, with the entire Dedede Academy school crumbling with him.

Nekketsu is a very humanoid-looking creature. He has gray hair and gray eyebrows, and he has sunken-in yellow eyes. His gray hair is held back by a bandana with red, black, and white coloring that run along it in a zigzag pattern. He wears an evil grin on his face, and his mouth is large and full of pearly white teeth. He wears blue shoes and is very well-dressed, wearing a pink shirt with a green necktie and a purple tuxedo over his pink shirt, and he wears white gloves. A red yin-yang is painted on the back of his tuxedo. Nekketsu comes complete with a bokken that he can whack anything and anyone with, as well as a blue energy sword with a golden handle.

Nekketsu's abilities involves being able to leap at incredible heights and can stretch his arms to attack his enemies from a far, his first weapon is a wooden sword for combat and later on a beam sword, which is shown powerful enough to block Sword Kirby's Sword Beam for the first time, being a samurai monster, Nekketsu is a skilled swordsman, being able to battle Sword Kirby with ease. 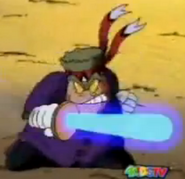 Nekketsu stretches his arm to attack Kirby.
Add a photo to this gallery
Retrieved from "https://kirby.fandom.com/wiki/Nekketsu?oldid=321812"
Community content is available under CC-BY-SA unless otherwise noted.