Regular Enemy
Needlous is an enemy in the Kirby series, debuting in Kirby: Nightmare in Dream Land. It gives Kirby the Needle ability when inhaled.

Needlous is a small little larva-like enemy with yellow and dark brown (black in artworks) stripes running along its small, slug-like body. Its body has eight sharp pointy spikes along its back making it somewhat resemble a hedgehog. It has small, beady black eyes. When curled up to a ball, four of its spikes will be present.

In Kirby: Nightmare in Dream Land, Needlous essentially replaces Togezo from Kirby's Adventure. Togezo shared similar properties to Needlous. On a regular basis, they move around slowly, but they will occasionally curl up in a ball and roll vigorously at an amazing speed when approached.

Needlous reappears in Kirby: Canvas Curse, acting the same as before. Needlous appears in Stages 1 and 2 of Wonder Lilane, Frozen Fantasy and Mad Mechanism.

Needlouses return in Kirby and the Forgotten Land, retaining their behaviour from the 2D games. However, a Needlous that strikes a wall mid-roll will bounce off the wall and change direction.

Needlous's name is a portmanteau of "needle," referencing its spiky body; and "louse," referencing its appearance. Alternatively, the name's ending may simply be the -ous suffix that is used to change a noun to an adjective describing something that possesses that noun. 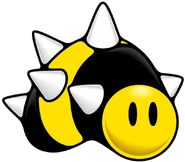 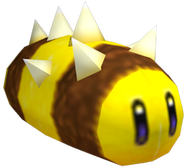