Anime: Kirby turns yellow and gains a pink helmet with spikes on the top, with a red visor and a white chin-strap.
Games: Similar to above, but without the visor and chin-strap, and no change in color. The visor is replaced with a yellow brim.

Needle is a Copy Ability in the Kirby series, debuting in Kirby's Adventure.

Needle focuses on surrounding Kirby in spines to deal damage. It operates somewhat similarly to Spark and Freeze. Needle is obtained from Togezo in Kirby's Adventure and Needlous in Kirby: Nightmare in Dream Land.

In Kirby: Nightmare in Dream Land, Needle turns Kirby yellow and he wears a pink helmet with spikes (silver in-game, gold in artwork).

Needle causes Kirby's ground movement to stop almost instantly upon use; it also prevents Kirby from bouncing if he is airborne. Needle is also able to stop Kirby's movement when on a slope, and is the only way to do so; as such, Togezo is usually placed in holes where stopping on a slope would be desirable.

Needle can be combined with one of the Animal Friends to give it a different move. It is also the only Copy Ability that can destroy the Needle Ability Blocks.

In Kirby's Dream Land 2, Needle can be combined with Rick, Coo, or Kine. As with Kirby's Adventure, which preceded it, Needle can only be out for a brief amount of time. Needle can be obtained from the Spikey enemy or the Captain Stitch mid-boss.

In Kirby's Dream Land 3, Needle can also be combined with Nago, ChuChu, and Pitch. Gooey, who behaves near identically to Kirby, can also obtain Needle. Needle can now be kept out for as long as the button is held. Needle is required to pop Piyo's balloon in Stage 2 of Cloudy Park to obtain the Heart Star from Keko. Needle can be obtained from Togezo, Tick, Boten, the Needle Bukiset, and Captain Stitch.

Needle lets Kirby briefly stop and surround himself in spines. This destroys any white blocks, gray blocks, and Ability Blocks in its way for double points. If used near a paddle, Kirby attaches to it and can be re-launched. Needle can be obtained from Spikey or a Changer.

Needle can be combined with other Copy Abilities to create Power Combos, which can be used to create various spiky options. Needle is capable of destroying orange color-coded blocks. Needle can be obtained from Punc, Tick, Ghost Knight, Kacti, and Miracle Matter's Needle form.

Needle extends its spines out for as long as the button is held; simply ramming into enemies is also enough to do damage. Needle is obtained from Pichikuri.

Needle retains its behavior of surrounding itself in spines, although in this game, Kirby is still mobile while performing the move. When attacking, Kirby rolls forward while surrounded with spines, and can stick to any walls and ceilings it makes contact with. Needle can be obtained from Needlous and Tick.

As Kirby: Canvas Curse only allows Copy Abilities to be used within the stages they are found, Needle can only be used in certain locations. Needle can be found in Dreamy Darkness, Frozen Fantasy, and Mad Mechanism.

Needle can now fire its spines as projectiles, roll into a ball with spikes out, and create a single large needle up above, similarly to Needle with ChuChu, Wheel, and Needle + Spark respectively. Needle can be obtained from Needlous, Tick, and Togekuki.

Needle is mostly unchanged from its appearance in Kirby's Return to Dream Land. However, it lacks Rolling Needle. Instead, Needle received Falling Spine, which resembles an inverted version of Mega Needle, although acts more similar to Needle with Coo; Needle Burst also only shoots five needles instead of six, regardless of being on the ground or in the air, making it more similar to Needle with ChuChu. Needle is obtained from Tick.

Needle undergoes the greatest visual change in the anime. It gains an ability cap for the first time in the franchise, gaining a pink helmet with a red visor, a white chin-strap, yellow skin and orange feet, but Kirby no longer turns into one giant spike ball (spinning like one giant spike ball in the episode Flower Power). Instead, Needle is changed into a long-distance ability. A similar cap would later be used in Kirby: Nightmare in Dream Land, and would make further appearances.

Kirby can launch the needles off the top of the helmet like tiny missiles, which he can then control. The needles 'grow back', but not always, leaving him defenseless at times. In the transformation sequence, a flash of red lightning forms his helmet and changes his skin color. Needles appear from the helmet, which shrink to their usual size seen in the games. 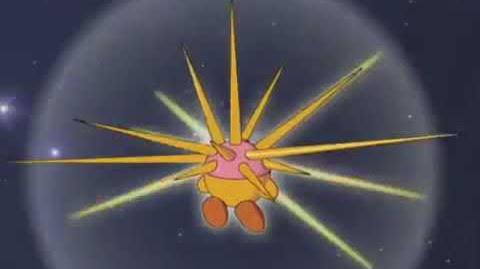 Needle Kirby also appears as a sticker in Super Smash Bros. Brawl. The sticker uses his design from Kirby 64: The Crystal Shards and increases any fighters' Head Attack by 29 when applied. 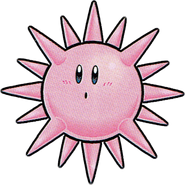 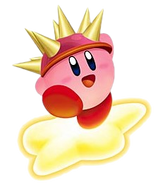 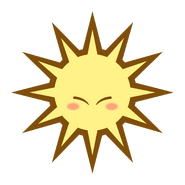 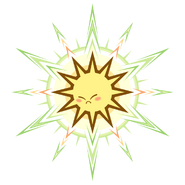 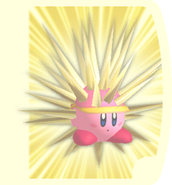 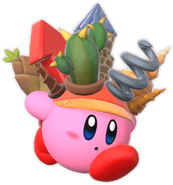 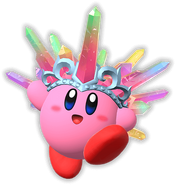 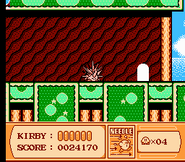 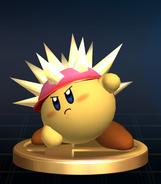 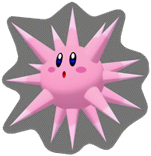 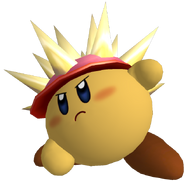 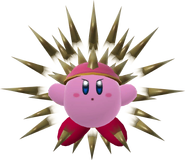