In the first part of the level, Kirby appears at the top of a hill sloping down to the right, with many small platforms above ground. Some of these have stars. As the player goes up another hill, they encounter two Kabus before coming to a giant, circular blade under which they must run at the correct moment. The player faces more Kabus, some Propellers, a Bio Spark, and another blade with a Picture Piece on it before entering a door leading to the next room.

In the second room, the player has to jump over a floor of lava to get to a platform sticking out from the right wall, where they have to fight Driblees, a Bio Spark, a group of Kabus (including a Dekabu), and two Sizzle Guards before flying over the wall to continue. They continue and run into a Birdon, under which is a platform Kirby has to fall through to enter the first puzzle room.

In the puzzle room, the player appears to the right of a Ninja Copy Essence which they are encouraged to take before they go down the nearby ladder. They then have to befriend the eastbound Birdon to get Bluster Ninja, which they use to cut two flaming chains and access three Picture Pieces and a few stars before exiting. They then enter the next room via the door behind the Dekabu.

The third room sees Kirby running up a hill, ducking under a blade, and continuing to a set of large platforms, where he defeats a Kabu, a Propeller, and a Sir Kibble. If the player defeats the Sizzle Guard, the can go down a ladder that gives access to another puzzle room after more flaming chains are cut, as well as two Picture Pieces. This leads to the Big Switch, and upon exit, the player can skip past the Chilly above. They then make their way past a Sizzle Guard and Rocky, and avoid a blade while running down a hill leading to the next room. The door is guarded by a Kabu.

As the player ascends through the fourth room, they encounter a Knuckle Joe, and are given the task of avoiding blades on the sides of the screen (one has a Picture Piece). They face a few enemies, mostly Propellers, and make their way to the top, where they enter a cannon and blast themselves upwards through many more Propellers. This leads them to the goal. On the left of the door is a ladder which leads to the Rare Picture Piece and an alternate goal door. 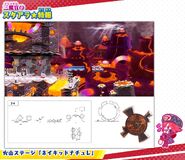 Hammer Kirby jumps up a series of platforms.

Kirby runs past a rotating saw.

Ninja Kirby fights Propellers as part of a Room Guarder.

Kirby runs down a steep hill and evades a rotating saw.

Kirby collects a Picture Piece as he climbs upward.

Kirby collects the Rare Picture Piece of the stage.
日本語
Community content is available under CC-BY-SA unless otherwise noted.
Advertisement