Nago is one of Kirby's Animal Friends who appears as a playable character in Kirby's Dream Land 3 and Kirby Star Allies. He is a cat and is about twice Kirby's size. Nago has made several cameo appearances throughout the series.

Nago appears to be a round, pudgy Japanese Bobtail cat with brown ears and tail, three whiskers and orange spots on his head and back. He has small arms and legs. His arms and legs are sometimes absent from in-game sprites, official artwork, and Ado's drawings. Nago's eyes are almost always closed, being open only when Kirby chooses another Animal Friend over him and when he is attacking with the Needle ability.

Nago rolls Kirby around like a ball. All of his abilities consist of using Kirby as a projectile weapon. Unlike Rick the hamster, Nago can triple jump in midair. Shiro is Nago's love interest in this game.

Kirby's Stone + Cutter Power Combo lets him turn into statues of any of his past animal friends, including Nago. In this form, Kirby can jump three times midair just like Nago. Although he can still walk, it is very slow.

Nago appears as a collectible sticker.

Nago appears as a primary, Novice-class grab spirit in Super Smash Bros. Ultimate. His spirit sports no effect when applied to a fighter.

Nago's name is likely derived from the word にゃあご (nyaago), an alternative way of saying にゃあ (nyaa), a Japanese onomatopoeic word for "meow."

Nago in the opening of Kirby's Dream Land 3 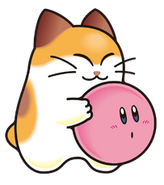 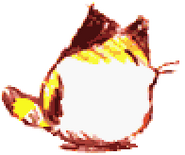 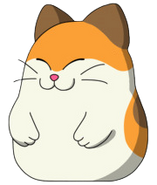 Kirby: Right Back at Ya! (unused) 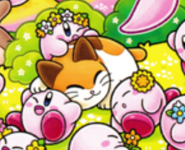 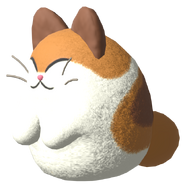