NESP is an enemy in the Kirby series, debuting in Kirby: Planet Robobot. He yields the ESP ability when inhaled.

NESP is a floating, wizard-like enemy wearing a black cloak with golden edges, topped by a black hood emblazoned with a golden ocular design and tipped with a golden ball. Below the hood, his white, spherical head always sports a small grin. Like Magolor, his detached, white hands float in midair.

NESP first appears in Stage 1 of Resolution Road, and appears in many stages thereafter. He floats in midair, and attacks Kirby at regular intervals when he is in his range by sending forth a small, purple ball of psychic energy. In addition, NESP may sometimes project a spherical shield of energy around himself. This shield will hurt Kirby if he touches it. He is also able to teleport himself short distances multiple times in rapid succession. NESPs cause lightning damage with their attacks.

NESP can teleport between planes and attack Kirby from the background.

NESP reappears in Kirby Star Allies. He again provides the ESP ability, and can be controlled by the CPU or another player though the friend system. While a helper, NESP wears Kirby's ESP cap underneath his hood, with the brim pointing forward instead of backwards. NESPs can provide the Zap enhancement with their powers.

NESP's name is likely a portmanteau of "Ness" and "ESP." Ness is a protagonist from the EarthBound video game series, also developed by HAL Laboratory. Ness, like NESP, can use psychic powers.

His Japanese name, ネスパー (Nesupā), is likely a portmanteau of "Ness" and "Esper," the latter of which refers to a person who practices the development of psychic ability.

His Dutch name in Kirby Star Allies, Esper, is taken from his internal filename in Kirby: Planet Robobot. 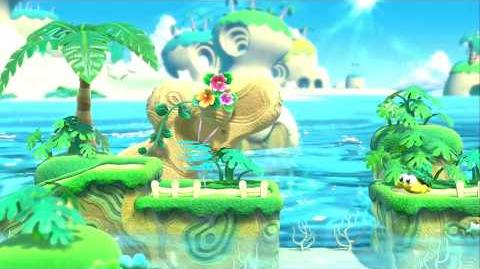 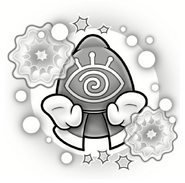 NESP generates energy around its body.

NESP casts energy from the background. 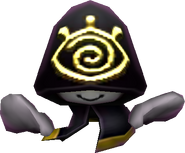