Kirby Wiki
Register
Don't have an account?
Sign In
Advertisement
in: Enemies, Characters, Articles with non-canonical information,
and 20 more
English

Mumbies (called Mummy Ball in Kirby's Pinball Land) is an enemy that first appeared in Kirby's Dream Land. It is a longtime member of the Kirby series, being featured in a plethora of both main games and spin-offs. While their wrappings can be messed with via Kirby's vacuum breath, Mumbies cannot be truly inhaled.

Mumbies is a floating disembodied mummy-like head that has white cloth wrapped around itself. There is a hole in its wrapping that reveals a yellow eye, red in Kirby 64: The Crystal Shards onwards, and in Kirby's Return to Dream Land, its bandages also float.

Mumbies first appears in Castle Lololo. Many of them haphazardly float around the interior of the castle alongside other spooky enemies like Boolers and Flappers. Mumbies cannot be inhaled, so Kirby must either avoid them or attack them using a puff of air.

In the Extra Game, Mumbies is replaced with the more aggressive Skuller.

Mumbies floats around the bottom stage of Whispy Woods Land. When Kirby hits it once, one letter of the word 'Warp Star' will light up; when hit eight times, Mumbies will explode and the Warp Star will take its place. Should the player choose to hop on the Warp Star, he/she will be taken back to the course selection screen.

Mumbies appears as an enemy in Stage 10. It floats in one place and, after three hits, drops a Flip item.

Mumbies uses the same tactics as in Kirby 64: The Crystal Shards and Kirby's Return to Dream Land. The only minor change is that Mumbies' eye will turn red when it pursues Kirby. Their stronger cousins, the Degouts, also return.

Mumbies first appears in Stage 3 of Level 4. It behaves like it does in Kirby's Return to Dream Land. Because it is one of the few enemies in the game that is immune to Inhaling, it is not necessary to defeat; if Kirby runs out of projectiles when facing Mumbies in a gauntlet, the enemy disappears in a puff of smoke. This prevents the hero from earning an Enemies Defeated bonus, however.

Mumbies appear as audience members in the Coin Clash mode.

Mumbies first appear in Metro on Ice, and use the same tactics as in Kirby 64: The Crystal Shards and Kirby's Return to Dream Land. A minor change is that the Mumbies' now emit a red searchlight from their eyes when pursuing Kirby.

In nearly all games Mumbies appears in after Kirby's Dream Land, it will follow Kirby around the levels. As usual, it cannot be inhaled. Exceptions are in Kirby 64: The Crystal Shards, Kirby's Return to Dream Land, Kirby: Triple Deluxe, and Kirby: Planet Robobot, where they only chase him when his back is turned, much like the Boos in the Super Mario series.

Mumbies makes an appearance in the Kirby: Right Back at Ya! anime as one of Nightmare Enterprises' monsters, he appears in episode 84, Mumbies Madness.

It was found in a jar that King Dedede tricked Professor Curio into digging up. After Curio released it from inside its jar, the mummified ball then flew around Cappy Town at night, scaring everyone it went to see with its scary face. It even attacked Kirby; that was its true mission, which was to hunt down and exterminate Star Warriors. Interestingly enough, unlike its game counterpart, Mumbies is only active at night; every time the sun came up, it would retreat and go back to sleep inside its jar. Eventually, Bomb Kirby was able to trick it into clamping onto him with its teeth without letting go until the sun came out, when witnessing the sun, Mumbies tried to escape, but Kirby forced him down as he chomps his face, at which point the sunlight burnt Mumbies to a crisp, thus destroying him for good.

The Mumbies in the anime is shown to have sharp, jagged teeth, which they use to ferociously bite anyone they come into contact with. It also attack by ramming full force and by shooting dark lighting beams from its single eye. This tricky monster lives in a jar and is known to be full of surprises. Its eye can glow many different colors, and if a victim look into its eye when it's glowing dark blue, he/she will grow tired. Oddly enough, unlike in the games, Kirby was able to inhale Mumbies. It didn't give any ability, and the Star Warrior was forced to cough it back up. It is also revealed in the episode that there are multiple Mumbies scattered all over the universe, each one with the same goal of causing chaos. It's unknown if the Mumbies were made by Nightmare Enterprises, but since they're against Star Warriors, they most likely are.

Mumbies looks similar to his gaming counter-part, he is a floating disembodied mummy-like head that has white cloth wrapped around itself. There is a hole in its wrapping that reveals a yellow eye, there is one major differices, he has a large gaping mouth with sharp, jagged teeth.

Mumbies can fly effortlessly in the air despite the lack of wings and can ram his enemies full force similar to his in-game counter-part, but he does have new abilities, with his gaping mouth, Mumbies can chomp any victim with his teeth that comes close to him and can change his eye into many different colors, if a victim looks into Mumbies' eye, he/she will get tired, allowing Mumbies to get free hits, he can also fire dark lighting beams from his single eye.

Its name is a combination of the words "mummy" and "zombies." 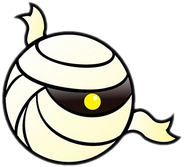 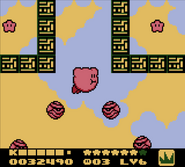 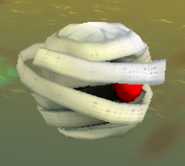 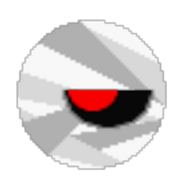 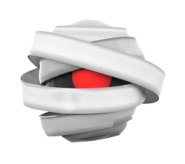