Mrs. Parfait is a character in the Kirby series. She appears in the Kirby of the Stars: Dangerous Gourmet Mansion!? novel.

Mrs. Parfait is a plump lady with large, curly hair, lipstick and rosy cheeks. She wears a derby hat styled like a pudding with a cherry on the left side, a pair of pearl bracelets and a pearl necklace, with the necklace that has a gem that resembles a wrapped candy and a large sleeveless dress with a ribbon around the waist and a split at the end of the dress, where a second wavy layer with a pearl on each tip comes out.

Mrs. Parfait appears as a character in the Kirby of the Stars: Dangerous Gourmet Mansion!? novel. She is a rich woman who recently moved to Dream Land. She lives in a large mansion, and wanted to have a birthday party celebration, so she gathered some cooks and sent invitations to various customers. Contrary to her appearance, she has a selfish personality. She ignores the advice of the cooks and punishes them for unreasonable reasons, confining them in a hidden room.

A "parfait" a cold sweet food made from sugar, eggs, cream, and usually other flavors, such as fruit or alcohol. 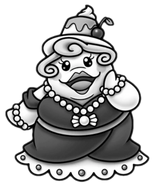 Kirby of the Stars (Mie Takase)
Add a photo to this gallery
Retrieved from "https://kirby.fandom.com/wiki/Mrs._Parfait?oldid=327287"
Community content is available under CC-BY-SA unless otherwise noted.