180 HP
Mr. Tick-Tock is a mid-boss who grants the Mike ability. He resembles an alarm clock with four hands on his face. The upper hands serve as eyebrows and the lower hands serve as a mustache. He comes in assorted colors throughout the series. He attacks by jumping and launching music notes, as well as making short-ranged sound waves.

Although usually a mid-boss, Mr. Tick-Tock also appears as a drawing in Paint Panic, a sub-game in Kirby: Canvas Curse.

Mr. Tick-Tock is a large circular, creature that resembles an alarm clock. His body is a reddish color and has two blue feet. The center of his face is a light orange color. Mr. Tick-Tock has a moustache and bushy eyebrows that resemble the hands of a clock. He has small blue limbs, a reddish, round button-nose on the center of his face, and has cartoonish glove-like hands. Much like real life alarm clocks, he has two gold bells and a small hammer that are on the top of his head.

Mr. Tick-Tock appears as a recurring mid-boss in these games. He jumps around haphazardly in an attempt to crush Kirby. He can also create a force field of sound (in the form of an alarm) around his body by forcibly ringing the bells on his shoulders. At times, the sound also creates musical notes which can be used to shoot back at him. If Kirby inhales him after his defeat, he is awarded the powerful Mike ability.

Mr. Tick-Tock appears alongside some of the other mid-bosses from Kirby's Adventure and Kirby: Nightmare in Dream Land in the new sub-game Revenge of the King. He is first found hidden in a secret area in Illusion Islands, where he can be fought optionally, and then shows up later in the final level of the sub-game, The Revenge. The second time Kirby encounters him he is not optional and must be defeated in order to move on. Mr. Tick-Tock is also fought in The True Arena alongside the rest of the retro mid-bosses. In this game, his force field ring attack makes a sound similar to a phone. Otherwise, however, he behaves the same as he did in past games. Kirby can once again get the Mike ability from inhaling him.

Mr. Tick-Tock was named after the onomatopoeia "tick tock" based on the sound that clocks make. 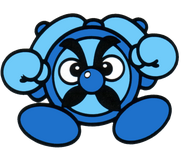 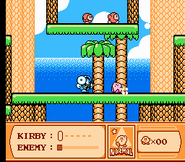 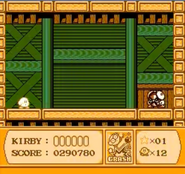