Mr. Shine & Mr. Bright are a duo resembling the moon and the sun (respectively), and recurring bosses in the Kirby series. They first appeared as bosses in Kirby's Adventure, and have never been encountered separate from one another. Even after one of the two is defeated, they still work as a team (to an extent) to fight against Kirby.

Mr. Shine is a yellow crescent moon that is always either scowling or sneering. He has thin white arms, legs, gloves, and large, curvy shoes. In early artwork, his limbs and shoes are yellow. Mr. Shine is usually surrounded by either a pale yellow glow or a light blue glow, depending on the game. In Adeleine's drawing, Mr. Shine's legs and feet are absent.

Mr. Bright is a burning, reddish-orange sun that has yellow cheeks and a mean expression on his face. He, like his counterpart, wears a pair of white gloves (portrayed as red in early official art), and sometimes has yellow limbs. In most games, Mr. Bright is simply covered in a fiery cloak, though this commonly alternates with triangular yellow and orange sun rays.

Although it is clear that the two are not the real moon and sun, they are both shown to have some impact on the time of day on Popstar.

When Nightmare tries to take control of Dream Land by corrupting the Fountain of Dreams, King Dedede entrusts the duo with a piece of the broken Star Rod. The two are fought at the end of Butter Building. They work in shifts; as one of them fights Kirby on the ground, the other one takes to the sky to attack from above, alternating every so often. If Kirby gets too high up, the one in the sky slowly homes in on Kirby and collides with him, damaging him and forcing him back to the ground.  They won't follow Kirby when he is at the very top of the screen, however. The pair uses separate life meters, each filled up half way. The first one to be defeated turns cracked and broken, and continues the rest of the battle in the sky. After the second is defeated, the two collide in the air, exploding.

While on the ground, Mr. Shine throws golden, glowing boomerangs at Kirby. He also attacks by rolling full force into him. During this attack, if Kirby crouches, Mr. Shine will roll right over him without inflicting damage. While on the ground, Mr. Shine virtually can't harm Kirby if he is crouching. While in the air, he will throw down shooting stars, which crash into the battle field. If Kirby inhales one of these stars before it crashes, he will become Cutter Kirby.

Mr. Bright either launches large fireballs, or surrounds himself in fire and charges into Kirby while on the ground. When in the sky, he will unleash a large, powerful, flaming column of energy that moves very slowly across the ground. On both sides of the pillar are stars which bestow the Fire ability. If close enough to the beam column, these stars can be inhaled at the same time, allowing Kirby access to any random ability.

Mr. Shine & Mr. Bright only make an appearance in the 2-player version of the game. Whenever a player happens to land on a sun or moon panel, one of them appears and changes the time of day, which in turn switches the player's star points that they obtained on the hole with their opponent's points.

Mr. Shine and Mr. Bright make up the thirteenth competitor that must be challenged in the competition, following Heavy Mole and preceding Kracko. They get into a small argument with Kirby prior to the fight. Their dialogue is below.

The duo serves as the boss of Red Canyon. As in all the other games as before, one fights on the ground while the other attacks from the sky.

This time however, the stars from Mr. Bright's sun beam attack gives Burning instead of Fire (which was absent from this game). They now have a powerful attack added to their arsenal, popularly known in the fandom as the Eclipse. This attack consists of them both going into the air and shortly begin to orbit each other, soon creating a disastrous solar eclipse. Mr. Shine shines a small sliver of darkness at a part of the ground, and the rest is covered by Mr. Bright's blinding light. Every area on-screen except the small section of darkness is engulfed by fire. To successfully avoid the attack, Kirby must rush to the shadow before the rest of the screen lights on fire.

Mr. Shine and Mr. Bright are the bosses of Stage 5. The battle begins with Mr. Shine. He travels in an elliptical path around the center of the stage, throwing miniature crescent moon blades at the paddles surrounding each side of the arena, which shrinks them. After Kirby knocks into him six times, Mr. Shine explodes and Mr. Bright takes over. He floats back and forth, releasing fireballs. He only aims for the bottom paddle but throws three fireballs at a time.

This is one of the only games in which the two are not fought at the same time while they are both on screen (the other being Kirby's Pinball Land).

The real duo does not appear in this game, though Adeleine paints up a copy of the two after Kirby defeats her Sweet Stuff drawing. They serve as her third drawing.

These knock-offs are much less powerful than the real Mr. Shine and Mr. Bright. Their strategy is a simplified version of their behavior in past games; one stays on the top of the screen while the other stays at the bottom, alternating so often. When fighting in the air, "Mr. Bright" drops down small meteors and "Mr. Shine" drops small yellow blades. The one on the ground do not have any set attacks, and instead just go from each side of the screen to the other, trying to crash into Kirby. After the first one is defeated, the remaining one bounces around the screen, occasionally dropping either blades or meteors, depending on which one is left.

Upon their defeat, Adeleine will draw her fourth and final creation, Kracko.

In Kirby Mass Attack, the duo appear as bosses in the sub-game Strato Patrol EOS. Kirby encounters them at the end of the third stage. They employ the same tag-team tactics used in previous games.

Mr. Shine will attack by rolling across the screen (during which he is completely invulnerable) while Mr. Bright attacks by firing a beam from his hands, as well as firing solar waves from his body, an attack not unlike their eclipse attack from Kirby's Dream Land 2.

If Kirby manages to beat Mr. Bright first, Mr. Shine will hastily revive him, meaning Kirby must take Mr. Shine out first before focusing on Mr. Bright. If the player is going for the high score however, it would mean doing the exact opposite, as shooting Mr. Bright's projectiles essentially yield infinite points as long as he is there to fire them.

If Mr. Shine is still undefeated while Mr. Bright is defeated up to four times, rather than reviving Mr. Bright again, he will instead merge with him, becoming a whole new foe. In this form, the combined duo is able to use Mr. Shine's rolling attack, which is now much faster, as well as Mr. Bright's sun beam.

Mr. Shine and Mr. Bright may appear in Kirby Super Star and later in Kirby Super Star Ultra. In these games, what appears to be the duo (simply referred to as the sun and moon here) are tricked into fighting by Marx during the events of Milky Way Wishes. This causes trouble in Planet Popstar as the day and night cycle is ruined. The two actually play a more helpful role in this game, and end up protecting Popstar by holding Nova back and giving Kirby enough time to enter him and destroy his heart. By the end of the game, the two are calmed down and Popstar is back to normal. While it is never stated if the sun and moon in question are actually Mr. Shine and Mr. Bright, they incidentally resemble their mid-air sprites from Kirby's Adventure.

In Kirby's Pinball Land, the two are faced as mid-bosses, guarding the Warp Star that leads to Kracko. In this game, Mr. Bright appears first alongside several clouds. After being damaged three times, it suddenly becomes night and Mr. Shine, who guards himself with a wall of stars, takes over. Once Kirby defeats him, the Warp Star will come.

In Kirby and the Rainbow Curse, Mr. Bright makes a cameo appearance on page 19 of Elline's Secret Diary.

Mr. Shine and Mr. Bright themselves never actually appear in Kirby: Right Back at Ya!. However, their designs were used in the Sun and Moon Rods wielded by the monster Slice n' Splice in the episode The Fofa Factor. The two rods posses supernatural powers which allow Slice n' Splice to divide his opponents in half and rearrange their anatomy at will. The moon rod was inhaled by Kirby for the Cutter ability, while the sun rod was destroyed along with Slice n' Splice.

They make no appearances afterwards, however their basic concepts (a yellow crescent moon and an orange sun with triangular rays) are used once more later on in the series. In the episode Waste Management, a crescent moon and a faced sun appear in a scene when Crowmon recounts his opinionated knowledge of Dyna Blade.

Mr. Shine and Mr. Bright appear as a primary, advanced-class neutral spirit in Super Smash Bros. Ultimate. When applied to a fighter, the fighter’s fire attacks will increase. 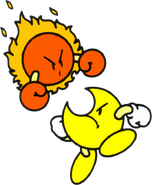 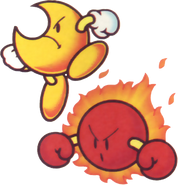