Mr. Frosty is a mini-boss in very many Kirby games. He has the same look in all of the games. He resembles a tuskless walrus with a blue mustache, black overalls (missing their seat), blue shoes and white fur. His first appearance was in Kirby's Adventure.

Eating him gives either the Ice or Freeze copy ability depending on the game. Being a creature of ice, Fire abilities do major damage in battle and can easily defeat him.

Mr. Frosty's first appearance; to fight him without an ability, Kirby has to wait for him to toss a block of ice then inhale and spit the block back at him. Mr. Frosty will also sometimes charge at Kirby. And although there is supposed to be one Mr. Frosty, in Rainbow Resort, there is a room (not in the mini-boss tower) where there are two Mr. Frosties. In this game Kirby gets the Freeze ability from Mr. Frosty.

Mr. Frosty reappears with the same tactics and gives the same ability he does in Kirby's Dream Land 2, bar the fact that is more spontaneous in his movements, making him slightly harder to defeat. In this game, Mr. Frosty has 100 hit points, making him one of the weaker bosses. He is weak to Fire-based attacks.

He later appears in Kirby Super Star Ultra with the tactics used in later games.

Mr. Frosty was slated to appear in the Nintendo 64 version of Kirby Air Ride. Whether he was playable or not he was not revealed, due to the cancellation of the game. He does not appear in the GameCube version.

In Kirby & the Amazing Mirror, Mr. Frosty's name was mistranslated as Mr. Flosty. He is still mostly the same as he was in Kirby: Nightmare in Dream Land. This time however, he will sometimes throw a huge block of ice that can only be inhaled with a super inhale. Also, if Mr. Frosty catches Kirby while charging at him, he will put Kirby in his mouth, then spit him out causing damage. Mr. Frosty gives the Ice ability in this game.

Mr. Frosty's tactics have not changed since Kirby & the Amazing Mirror.

Mr. Frosty appears on the sixth stage on the fourth room, guarding the Warp Star. After Kirby gets onto the star, he has to fight Mr. Frosty.

Mr. Frosty appears in the sub-game Kirby Quest, in rounds 26 and 38; accompanied by two Oohroos and two Ice Noserunts, respectively. He has the same sprites and attacks as in Kirby Super Star Ultra.

When Phan Phan escapes, Customer Service turns to Dedede to help return him. Dedede is angry at him, and tells him that he should be ashamed for letting him escape. However, Customer Service says that he wasn't in his care at the time. He goes on to explain that he was at the "Monster Training School". Mr. Frosty is one of the few monsters to be shown in the training school. He, along with Yaban, is a member of the Flower Class, which is the weakest of the whole school, which is ironic seeing that he's the only mini-boss in the whole school (excluding Jukid, who only appears in only two games, who is also only one level above Mr. Frosty). He is shown riding precariously on top of a unicycle.

It is not known what becomes of him after Nightmare is destroyed, neither is it known if he even finishes training school and becomes a full-fledged monster by the end of the series. 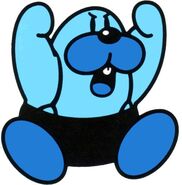 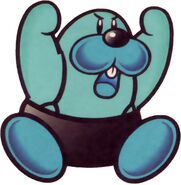 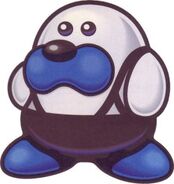 Retrieved from "https://kirby.fandom.com/wiki/Mr._Frosty?oldid=123178"
Community content is available under CC-BY-SA unless otherwise noted.