Kirby Wiki
Register
Don't have an account?
Sign In
Advertisement
in: Articles with non-canonical information, Enemies, Characters,
and 4 more
English

Mr. Floaty is a boss in the Kirby series, debuting in Super Kirby Clash. He is a water variant of Mr. Frosty.

Mr. Floaty has light blue fur and a large, white upper lip. He has a light blue, round nose and two black eyes. He wears swim trunks with blue and white stripes that also has a patch on his buttocks. He also wears a swim cap with blue and white stripes on his head, along with pink swimming goggles with a brown strap and a blue snorkel with a pink tip.

During his battle, Mr. Floaty can pick up and bump large bubbles of water. He can also run towards a player before falling over on them. He can leap high into the air and bellyflop onto a player, flattening them. When he lands during this attack, four globs of water will be launched into the air and splash onto the ground. While running at a player, instead of falling onto them, he may grab the player and eat them, slowly damaging them. If the player manages to escape, he will be temporarily stunned.

In his second phase, Mr. Floaty gains a few new attacks. He can eat a blob of water in order to spit out a stream of water in the direction he's facing. He can now also leap into the air and twirl forward while spraying water, or he can use this attack while spinning throughout the background and foreground. Additionally, he takes two extra jumps before leaping into the air and bellyflopping. Mr. Floaty can quickly charge to the other side of the arena as well. When he hits the wall, he will be stunned, leaving him open to attack.

In the second phase of his Toughest category fight, Mr. Floaty can twirl around the arena while spraying water before heading to the center and launching four globs of water, finishing off with a splash pose and an additional four water globs. Additionally, while twirling around the arena and spewing water, he may stop at one side of the arena and twirl towards the other. When he hits the wall, he will be temporarily stunned.

During the second phase of his fight in the Team Shimmy quest, Mr. Floaty can charge to the other side of the arena twice instead of once.

"Mr. Floaty" is a variation on the "Mr. Frosty" name, being an elemental variant of him. "Floaty" conveys his swimming ability, as the term can informally refer to an inflatable floatation device used in water; "floaty" can also simply describe an object's buoyancy, such as one of a floatation device. 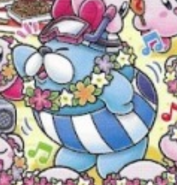 Mr. Floaty swirls through the air.