Bomb (from bombs); Fire (from flaming skulls) (EX form only)

Boss
Mr. Dooter is the second boss of Kirby's Return to Dream Land. He serves as the boss of Raisin Ruins and holds the Lor Starcutter's right wing.

When the player(s) first enter the arena, they notice a turban lying on the ground. Two disembodied hands float down from above and grab the turban. The hands knock on the turban, expecting the genie to appear but a puff of smoke is released instead. Surprised, the hands proceed to bash on the turban aggressively until Mr. Dooter (EX) finally appears and the battle commences.

Mr. Dooter is a blue, bowling pin-shaped genie. He wears green pants, a purple belt, and a red vest with yellow designs. He has a pair of disembodied gloved hands with golden bangles and a turban with an amethyst on a red and white feather that conceals his dark blue hair. Mr. Dooter keeps the same blank expression throughout the fight.

In the Extra Mode, Mr. Dooter has a few changes. He is now red and wears dark gray pants with a blue belt. Mr. Dooter EX's vest is now black with yellow designs and his turban, which conceals his bald head, now has an emerald with a blue feather. The most notable addition to Mr. Dooter EX is his mustache and his angry expression.

Mr. Dooter's main attack is juggling either skulls or purple bombs in a set of three. These skulls will disintegrate when they come in contact with the ground and the bombs will explode when they come in contact with the ground. Mr. Dooter may even juggle a mixture of both bombs and skulls. For the skulls, he will fling them at a slight angle ahead of himself. For the bombs, he will levitate them high above in the air a few spaces apart from each other before dropping all three to detonate on the ground. Another one of his attacks is to jump around the room after winding up, trying to crush the players. Kirby and the crew can simply walk under him while he's in midair to avoid the attack. Mr. Dooter may also wrap himself inside a tornado and hover overhead. After a few seconds of hovering, he will crash down, trying to hit the heroes. Occasionally, the genie may take off his hat and throw two red Dooter Snakes, which can easily be disposed of.

After Mr. Dooter's health is half depleted, he will grow larger and will flash in rainbow colors. This time, Mr. Dooter will juggle larger skulls and larger bombs. Mr. Dooter will also juggle Gordos now, which cannot be destroyed and must simply be avoided. He jumps much higher now and lands much faster. His tornado attack now bounces around a few times on the ground before crashing down. Mr. Dooter can also summon four Dooter Snakes or three Babuts out of his hat. The genie can now throw three small, flaming, consecutive punches or one massive fiery punch.

After Mr. Dooter has been defeated, his turban will fall off his head as he collapses on the ground and explodes, releasing the right wing.

Mr. Dooter is defeated.
Add a photo to this gallery

Mr. Dooter is fought again in Extra Mode as Mr. Dooter EX, and the genie has got a few tricks up his sleeves. Once again, he mainly attacks by juggling now-flaming skulls, bombs, or a mixture of both. The skulls grant Kirby the Fire ability if inhaled. However, instead of throwing them downward, Mr. Dooter EX will actually aim for Kirby or one of his friends, throwing it at the direction they're currently at. He can also send out 5 orange Dooter Snakes from his hat. His jumps are much higher and come down a lot quicker. Mr. Dooter EX's tornado attack allows him to bounce around as he attempts to crush his foes at the start of the fight now. The genie can also wrap himself in a tornado, but instead of hovering or bouncing overhead, he will simply try to ram into the heroes.

Like before, once Mr. Dooter EX's health is depleted to half, he will glow in rainbow colors for a bit and become larger. He can now juggle massive skulls, bombs, and even Big Gordos, trying to aim at Kirby and his crew as he attacks. He can release 8 Babuts from his hat as well. Mr. Dooter EX's jump attacks and tornado attacks go even quicker. His punching attacks now leave behind a lingering flame trail that will disappear after a while. Mr. Dooter EX may also attempt to grab one of the characters with one of his hands, juggling, then throwing them and disposing of their copy ability.

Once again, after being defeated, Mr. Dooter EX will collapse on the ground and explode, releasing the Starcutter's right wing.

Mr. Dooter EX burns the ground with his fists.
Add a photo to this gallery 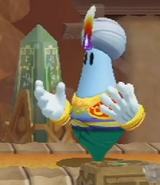 Kirby's Return to Dream Land
Add a photo to this gallery
Retrieved from "https://kirby.fandom.com/wiki/Mr._Dooter?oldid=310209"
Community content is available under CC-BY-SA unless otherwise noted.