Mid-boss
Moundo is a mid-boss appearing in Kirby's Return to Dream Land and Kirby's Dream Collection Special Edition. Moundo is a semi-common mid-boss. He looks similar in appearance to a Rocky and just like it, he gives the Stone Copy Ability when inhaled.

Moundo is a large brown rock, with what looks like snow on top of three small peaks on his head, giving him the appearance of having craggy gray "hair" on top. He has a jagged mouth set in a frown with bits of moss on his lower lip and small, angry eyes with brown pupils. Just like Rocky, he has no hands or arms. He wears brown sandals with orange bands on his large yellow feet. Moundo also wears a red and white striped headband around his forehead.

Moundo's Extra Mode counterpart, Moundo EX, has a gray body instead of a brown coloration, and his feet are a dark red. He also lacks the small pieces of moss that regular Moundo had on his bottom jaw. A last coloration difference between Moundo EX and his counterpart is that his headband now bears yellow and black stripes.

Moundo has main four attacks that he uses in battle: charging into Kirby after building up some speed, spinning around on the floor and sliding around a bit to follow Kirby if he evades the first spin, leaping high into the air to smash Kirby, and even a homing jump where he uses a whirlwind around himself to float into the air in hopes of crushing Kirby below him. The charging attack and crushing attacks leave stars behind for Kirby to use. When Moundo is in the middle of his spinning move, he will flash gray during it and be invincible to all attacks.

Moundo EX behaves the same as the normal form of Moundo, but can still take and dish out more damage like all the other EX enemies. He can use his whirlwind jump to bounce up and down repeatedly towards Kirby and his spinning move lasts longer. His jumping attack can now be used several times in a row. His most powerful attack now is to float above Kirby with his homing jump, but should Kirby pass underneath him, Moundo EX will grow to a bigger size and be even harder to avoid after he slams down. He shrinks down to normal size after he finishes the attack. 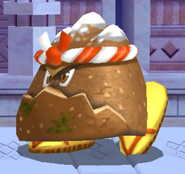