Morpho Knight is a character in the Kirby series, debuting as the final boss of the Guest Star ???? Star Allies Go! sub-game in Kirby Star Allies. It is a mysterious being that arrives at the site of great battles to cast judgement.

Morpho Knight is a spherical creature with black skin, white glowing eyes and no mouth. It has yellow shoes and gloves. Its armor is red with black ornamentations and white shoulder pads with a red swirl on both of them. Its mask has horns which resemble antennae. It has red sparkling butterfly wings on its back. It wields a sword that looks similar to Galaxia, but it has a red and gold coloration with a butterfly pattern on its handle, with blue spots on both sides of the tip of the sword. What appears to be a gemstone can be seen on the handle, which has a thin black line across it, giving it a similar appearance to a snake's eye.

While Morpho Knight EX's physical features remain the same as its original incarnation, the color scheme has been altered to a mostly black body with a red blade, red eyes and wings, and purple highlights on its mask and shoes. Its blade also has an eye that resembles the ones that mark Void Termina's weak points.

In its initial appearance in Kirby Star Allies, Morpho Knight lacked arms; its Kirby and the Forgotten Land appearance gives it arms like Meta Knight and Galacta Knight.

While most information is left ambiguous and mysterious in the English versions of Morpho Knight and Morpho Knight EX’s pause screen descriptions in Kirby Star Allies, the Japanese versions give more details about what Morpho Knight actually is. The butterfly that is seen before Morpho Knight’s birth is described as a “butterfly of paradise,” and it appears in the present time after something has “ceased to be.” Along with the constant mention of “judgement day” in Morpho Knight’s pause screen descriptions, as well as its regular battle theme title, this seemingly implies that the butterfly is a being of judgement of sorts that decides the fate of those who have perished, although this is not confirmed.

In Japanese mythology, butterflies are often associated with death and spirits, where they are sometimes believed to be guides of the spirits of the dead that take them to the afterlife, akin to a psychopomp, and seeing as how Morpho Knight is a butterfly, this appears to support the implication that it is associated with death. The butterfly is also stated to have the ability to cross dimensions into other worlds.

Morpho Knight appears as the final boss of Guest Star ???? Star Allies Go!, with the boss title of Reborn Butterfly. After Galacta Knight, the greatest warrior in the galaxy, emerges from the dimensional rift created by Hyness, the butterfly flutters down from another dimension and resonates with the “screams of the many years spent living” that Galacta Knight has brought with him. It then absorbs Galacta Knight’s power, seemingly disintegrating him in the process, and is reborn as a “knight of the underworld."

Morpho Knight EX is the form Morpho Knight takes when it has mastered its new abilities after amplifying the power it has inherited from Galacta Knight to make it its own.

It behaves just like Meta Knight and Galacta Knight in that it uses sword attacks, but Morpho Knight's sword is imbued with fire. If the player or friend has a Sword ability, they can deflect its sword attacks by attacking it, making their swords clash and causing it to flinch. However, one unique move Morpho Knight has is its ability to teleport. Additionally, Morpho Knight can fly to both sides of the screen, charging its sword, and emitting two giant ghostly faces. Also, Morpho Knight can charge and release sound waves from its wings that turn the leading player’s friends against them, similar to what the core of Void Termina does; a Friend Heart must be thrown at the confused friends to return them to the leading player’s side. Morpho Knight may also slice forward and then up, trapping Kirby and his allies in the air while performing a series of slashes on them before slicing them back onto the ground, dealing massive damage. Also, in its second phase, it creates a second sword, teleports to one side of the screen, and enlarges one of them. It then swings it forward, similar to Ultra Sword, damaging anyone behind it or in front of it. It then repeats this on the other side. After that, it teleports to the center, enlarges both swords, and swings them down on each side. Morpho Knight can also teleport around the arena releasing sound waves whenever it appears. In the second phase, among with emitting two ghastly faces, it can instead emit one huge ghostly face, then fly to the other side of the screen and summon another one. Additionally, it can create one to four tornadoes, depending on how many players there are, that head into the background and then charge into the foreground one at a time, similarly to Meta Knight's and Galacta Knight's Mach Tornado.

Morpho Knight EX appears as the final boss of Guest Star ???? Star Allies Go! if playing as The Three Mage-Sisters, with the boss title of Dark-Winged Disaster; it retains most of its old moves, but uses them at a faster rate and teleports more often. It should be noted that when it teleports, it leaves behind a small wave that can damage Kirby. Some of its old moves have also been altered to deal more damage or to be more difficult to avoid. Instead of releasing two medium-sized ghastly faces from its sword, it releases a large number of smaller faces that sweep across the battlefield in an arrow formation or a wave formation. It also gains Parallel Meta Knight's counter ability, but instead of retaliating with a swipe of its sword, Morpho Knight EX responds with its trapping aerial slash technique, which is far more damaging. When Morpho Knight EX is preparing to swing its enlarged swords, it summons small vortices that pull Kirby and his allies towards the area where the swords will strike, making it more difficult to evade the swings. Finally, instead of creating a number of tornadoes proportional to how many players there are, it summons five tornadoes that remain in the background before one at a time charging into the foreground.

Morpho Knight's name may hold multiple meanings. "Morpho" means "changed" or "modified," referencing how the butterfly transforms into Morpho Knight upon making contact with Galacta Knight and Soul Forgo, or the process of metamorphosis through which caterpillars transform into butterflies. Morpho is also a genus of tropical butterflies, which can be a variety of colors; some, such as the Morpho hecuba, appear in an orange color. However, it should be noted that Morpho butterflies have ocelli (eyespots), which Morpho Knight's butterfly form lacks, and Morpho butterfly wings don't have tails, unlike Morpho Knight's.

Morpho Knight's battle and birth are not canon in Kirby Star Allies, since these events only take place in non-canon sub-games; however, its battle and birth in Kirby and the Forgotten Land, as well as its role as a being of judgement, are canon.

Kirby of the Stars: Find!! 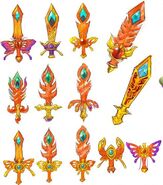 The butterfly lands on Galacta Knight. 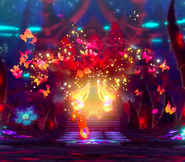 Alternate arena when playing as Wave 1 Dream Friends. Note that Hyper Zone from Kirby's Dream Land 3 is seen in the pool.

Alternate arena when playing as Wave 2 Dream Friends. Note that Dark Star from Kirby 64: The Crystal Shards is seen in the pool.

Alternate arena when playing as Wave 3 Dream Friends. Note that Another Dimension is seen in the pool. 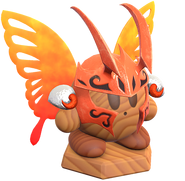 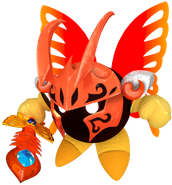