Moore is a character in the Kirby series. He appears in the Kirby of the Stars: Meta Knight and the Galaxy's Strongest Warrior novel.

Moore is a small fellow with short, moppy hair with goggles on top. He has oval-shaped eyes and blushes on his cheeks. He wears gloves on his hands as well as an apron with a pocket on it, and he has small, round feet.

Moore appears exclusively in the Kirby of the Stars: Meta Knight and the Galaxy's Strongest Warrior novel. He sent a message to the Halberd stating that he'd like to become a subordinate of Meta Knight. He has a serious personality and is eager, however, he is also timid, and very weak. Sword Knight served as his opponent in his test match, but despite trying his hardest, and Sword Knight going easy on him, he still lost. He should have done sword practice with a swordsmanship teaching set bought by his father. His timidness has caused him to get into trouble, and has lost his will to fight due to his loss to Sword Knight. His weakness put him at risk of being kicked out, however, Captain Vul saw his desperate appearance and allowed him to join the group in the form of an apprenticeship.

However, even after ten days of sword practice, he seemed to not have improved at all. While he was cleaning up the deck, he gets caught in a space pirate raid. Because he was under the guidance of the Meta-Knights, Meta Knight saved him as he tried to recklessly challenge the pirates. However, when the battle was over, Moore was nowhere to be seen, and had gone missing. A galactic survival crisis occurs as a result of his disappearance.

Kirby of the Stars: Meta Knight and the Galaxy's Strongest Warrior 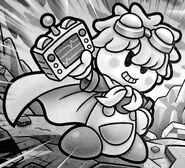 Kirby of the Stars: Meta Knight and the Galaxy's Strongest Warrior
Add a photo to this gallery
Retrieved from "https://kirby.fandom.com/wiki/Moore?oldid=344464"
Community content is available under CC-BY-SA unless otherwise noted.