View source
watch 02:19
Wiki Targeted (Games)
Do you like this video?
Play Sound

Moonja is an enemy in the Kirby series, debuting in Kirby's Return to Dream Land. It yields the Ninja ability when inhaled.

Moonja is a stout purple ninja with a silver headband, peach skin, and purple eyes. It also has white feet that each have two toes.

Moonja is usually hidden and will reveal itself when Kirby approaches it. The enemy then hops around briefly before throwing a single shuriken. This shuriken travels in a straight line, and can be destroyed with a Copy Ability. Moonja will then vanish in a puff of smoke. It reappears shortly after and repeats the process. Some Moonjas found in the game will permanently cling to a wall, hurling a steady stream of shurikens. If one of these enemies is knocked off the wall it is clinging to, it will begin to use its normal hopping and throwing strategy. A Moonja that is knocked off a wall will never disappear.

Moonja looks and acts exactly as it does in Kirby's Return to Dream Land, with the addition of one new technique: when Moonja disappears, it can reappear on a different plane from the one it was standing on originally. It cannot do this in Kirby: Planet Robobot.

Moonja's name is a portmanteau of the words moon, referring to nighttime and its association with ninja; and ninja, referring to the enemy's appearance and abilities. 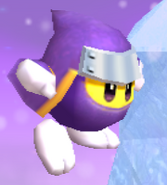