Stone, Wheel, Burning, Bomb, Cutter (from the trash it throws)

Moley is a character in the Kirby series, appearing as the second boss in Kirby & The Amazing Mirror and as a mid-boss in Kirby Mass Attack.

Moley is a large mouse-like mole. He has dark grayish blue fur, a tan colored snout, and big round ears. He wears a pair of red sunglasses (alluding to the fact that real-world moles have poor eyesight) and a red neckerchief around his neck. He has light colored cheeks and large tan paws with three big red claws on each paw, which are ideal for chucking rocks and trash at Kirby. Moley also has a mouth which is visible whenever he is laughing, displaying a wide grin.

Moley is the boss of Cabbage Cavern, and the second boss of the game. His arena consists of a slanted platform and a low ceiling, leaving Kirby with not a lot of room to fight. There are a total of six holes in the arena; three on the ceiling and three on the ground.

Moley's main tactic of harming Kirby is to emerge from one of the mounds of earth in his cave and toss an assortment of objects at him. He can hurl orange rocks that are both large (these yield the Stone ability) and small. The rocks will roll or bounce towards Kirby after landing on the ground. Moley will also toss out a screw that bounces several times after it first makes contact with the ground. When Moley throws out a bomb (which yields the Bomb ability), it will remain wherever it was thrown and explode without warning. Moley can also throw out a burning drum of oil that acts similar to the bomb but bounces a bit after first hitting the ground (yields Burning ability). Another object for him to use is a small tire that will quickly roll/bounce in whatever direction it was thrown in (yields Wheel ability). The last of the weapons is a saw from Heavy Mole (yields Cutter ability). After touching the floor, this object will trail along the ground until it disappears. All of these items can either be inhaled for Copy Abilities or spat back at Moley.

Aside from flinging objects, Moley can quickly pop out of the ground to sniff with his nose, damaging Kirby if he happens to be standing on a mound where Moley is emerging from.

After the final blow is struck, Moley collapses, exhausted, right outside the far right hole on the ground. He then drops one of the eight Mirror Shards.

Moley appears as a mid-boss in Stage 6 of Green Grounds and the Survival Rush sub-game. He, along with his Mole and Helmetmole underlings, burrows out of the walls. The Moles pop out and attempt to KO the Kirbys with bombs; after they are defeated, more Moles emerge alongside Helmetmoles. The Helmetmoles cannot be defeated and should be avoided, so the Kirbys must defeat the rest of the Moles. After this, Moley emerges from holes with Helmetmoles, just like the wave seen immediately before. It takes a number of Kirbys to yank Moley out of his hole and to the ground. When this happens, the mid-boss is defeated.

Moley also appears as a boss in the sub-game Field Frenzy. When one appears at the end of a round, there is a chance it will be Moley. Like Robo Moley, Robo Moley does not have any form of attack. he cannot be destroyed, as he consumes the time at the end of the round. The player can tap him as many times as possible within the last three seconds of the round to boost his/her score. Moley gives 20 points on the first, fifth, tenth, and fifteenth taps, and gives 10 points for every tap in between.

Moley appears as a Novice-class support spirit in Super Smash Bros. Ultimate. When applied to a fighter, he/she starts the battle with the Drill item. The spirit battle pits the player up against a giant Pikachu in the Omega version of The Great Cave Offensive, Pitfalls commonly appear, which can be used against Pikachu. 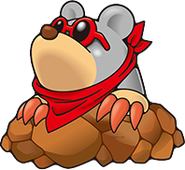