Kirby Wiki
Register
Don't have an account?
Sign In
Advertisement
in: Enemies, Characters, Enemies in Kirby & The Amazing Mirror,
and 2 more
English

Regular enemy
Mirra is an enemy in Kirby & The Amazing Mirror. It is a nervy and yellow blob-like creature with the ability to stretch its expandable body over a surface— in this case, a Mirror Door— and reshape accordingly.

It is extremely skittish and burrows into the ground as soon as Kirby approaches, taking with it the Mirror Door. If this happens, Kirby must exit and re-enter the area to encounter Mirra and its door again. It can be defeated through many methods: the Star Spit, a long-range attack or various abilities (Wheel, Burning, Cutter, UFO, etc.). It gets KO'd if Kirby lands just one hit, leaving behind the Mirror Door it was stretched over.

The easiest way to approach Mirra is to have Kirby store up a puff of air and float along the ground, and KO it by expelling an air puff; he can usually walk/float on the ground up to, and stay right next to Mirra without scaring it away beforehand.

Mirra appears as a collectible keychain in Kirby: Triple Deluxe.

Mirra also appears as a sticker in Kirby: Planet Robobot.

The name "Mirra" is a corruption of the word mirror. 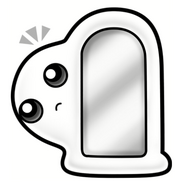