The Miracle Fruit is an item introduced in Kirby: Triple Deluxe. It is roughly the size of Kirby, and grows on curved vines found exclusively in Floralia. It grows almost instantaneously from a small plant to a fully matured one when Kirby approaches it. When eaten, this fruit grants Kirby the Hypernova ability, which lets his signature inhale "achieve maximum suckitude." Queen Sectonia's flowers devour four of them in The True Arena, causing her to transform into Soul of Sectonia.

Miracle Fruits are shiny, red, drop-shaped fruits encased in a yellow spiral. They cast a blue light. and spin as they hang from their vines. 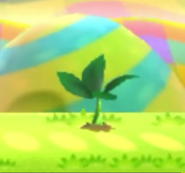 Taranza holding a Miracle Fruit.
Add a photo to this gallery
Retrieved from "https://kirby.fandom.com/wiki/Miracle_Fruit?oldid=210197"
Community content is available under CC-BY-SA unless otherwise noted.