Increases flight ability, allows Kirby to spit rapid air bullets
The Mint Leaf, known as the Sweet Potato in Japan, is an item in the Kirby series.

Consumption of a Mint Leaf will improve Kirby's aerial game and allow him to spit an unlimited number of air bullets much faster and farther for a limited time. Originally, it was supposed to increase Kirby's "burping," as a sweet potato can. When it was localized as a mint leaf, it gave Kirby "minty fresh breath," as it said in the Super Game Boy guide.

When Kirby fights Kabula, he obtains a special Mint Leaf that lasts until the battle is over. When it is obtained anywhere else, it only lasts for a short time.

The Mint Leaf appears as an item in the Kracko Land Bonus Game. It is worth 1000 points when eaten.

The Mint Leaf appears in the Kirby Fighters sub-game (as well as the downloadable Kirby Fighters Deluxe). It has similar effects as it did in Kirby's Dream Land. Kirby will automatically begin spitting air puffs once the item's obtained, pausing briefly after every few puffs. When the Mint Leaf is used up, Kirby will expel a giant air puff.

In the Kirby: Right Back at Ya! episode Dedede's Raw Deal, the sweet potato appears. King Dedede uses this on a potato sushi to give Kirby the hiccups, making it hard for him to battle a monster version of Squishy. It wasn't changed into a mint leaf in the English version.

Kirby Fighters Deluxe (Japan)
Add a photo to this gallery 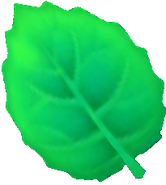