Milky Way Wishes is the sixth main game of Kirby Super Star and its remake. The game uses Copy Essence Deluxe: statues similar to ones inside Museums and Copy Essences that Kirby must touch before acquiring that ability. Inhaling enemies, regardless of whether they give Kirby a Copy Ability, results in a "no good"; the exception to this, however, is that Kirby can still obtain the limited-use abilities Crash, Mike, Sleep, Cook and Paint as normal. To acquire regular Copy Abilities, Kirby must find the necessary Copy Essence Deluxe for it. Beating Milky Way Wishes unlocks The Arena, containing all of the bosses that Kirby has fought before.

Kirby is seen standing in front of the Fountain of Dreams. The Star Rod glows and shoots a bright light up in the sky that soon spreads. The light soon opens and reveals the Sun and Moon fighting each other and pushing each other out of the sky, changing it constantly. The camera scrolls down to reveal Kirby standing alongside, Bronto Burt, Waddle Dee, and Poppy Bros. Jr., who were all watching the two trying to take each other down from far below. A jester named Marx appears bouncing on a multicolored beach ball. He asks Kirby to ask the giant comet Nova for help in order to stop the fight, but to do so, Kirby has to gather the star power from the different planets near Pop Star. Kirby, back at the Fountain of Dreams, jumps on a Warp Star that the Fountain made for him, and soars into outer space with Marx wishing him good luck.

After gathering the power stars from the seven planets, Kirby summons Nova and makes his wish. Before he can do this however, Marx knocks Kirby off screen and makes his own selfish wish: world domination on Planet Popstar. When this happens, he transforms into a fearsome monster resembling a bat. He reveals that he tricked the Sun and Moon into fighting each other, and that he managed to get Kirby into doing his dirty work for him, and this was all part of his master plan to conquer Popstar. Nova is obliged to grant Marx's wish, unfortunately forcing Kirby to destroy him. Nova begins looming towards Popstar, leaving Kirby alone in space. Fortunately, the power Kirby had gathered comes together and creates a Starship for him to chase after Nova with.

Nova is suddenly stopped by the Sun and Moon, giving Kirby the chance to enter him. Upon Kirby destroying his core, Nova is wounded, infuriating Marx, who then attempts to attack Kirby himself. Kirby then lands on what appears to be the moon from his battle with Nightmare, and fights Marx. Kirby wins in the battle, sending Marx flying away and into Nova, seemingly destroying them both in the process during a massive explosion engulfed in a bright white light. Kirby flies back to Popstar via a Warp Star, and the Sun and Moon are seen circling around each other, ending their feud.

Milky Way Wishes is the first and only game to feature Copy Essence Deluxe (Deluxe Copy Ability in the original game) in place of the usual means of Copy Ability acquisition. While this did fix the classic problem of not having the right ability at the right time, it did mean that the player initially had to travel powerless unless they, by prior knowledge or otherwise, visited the planet ???, and acquired the Copy Essence. With this item, they could replicate the traditional method of gaining Copy Abilities.

The premises for finding the Deluxe Essences are similar to finding Treasure Chests in The Great Cave Offensive, although there are a lot less items to find. There is a counter at the bottom-right of the Nintendo DS touch screen indicating how many Essences Kirby had not collected yet, which helps in locating the remaining ones. To fully complete Milky Way Wishes (and the game) at 100%, the player needs to find all 19 Deluxe Essences.

Milky Way Wishes is the only Kirby Super Star sub-game to be set largely in outer space. This would be done again, although on a smaller scale, in Kirby 64: The Crystal Shards, but since then, Kirby's adventures have taken place largely on Popstar. It is one of the only games in the Kirby series, along with Kirby Star Allies, to use a free cursor that allows Kirby to be moved on the map anywhere the player chooses to move him. 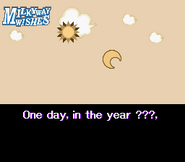 The Sun and Moon fighting in Kirby Super Star