Mike (referred to as Microphone in older titles) is an item in the Kirby series, debuting in Kirby's Dream Land.

As its name suggests, Mike resembles a condenser, or dynamic, microphone.

Mike appears in Castle Lololo and Float Islands. It is a powerful item that Kirby can utilize, and functions similarly to the Copy Ability it shares a similar name with. After inhaling it or walking into it, Kirby can spit it out. This causes him to screech into it, defeating every on-screen enemy.

Mike reappears in Kirby Tilt 'n' Tumble, functioning similarly to how to did in Kirby's Dream Land, except it is immediately used upon obtaining it.

Mike appears exclusively in Top Ride. Obtaining Mike will cause the Kirby to screech into it, causing the other Kirbys to lose control of their vehicles and have to shake the control stick back and forth to regain control.

Mike appears in the Kirby Fighters sub-game, as well as in the downloadable Kirby Fighters Deluxe. It causes every other Kirby participating in the match to take severe damage and go flying.

Mike appears again, having a similar utility role to the earlier Kirby Fighters entries. Unlike its previous appearances, it only harms players within a certain radius. Opponents hit by Mike's blast will take enough damage to receive the "DANGER!" message, which occurs when a player is at less than 1/4 max health, indicated by a red health bar; any opponents that get hit when in danger will lose all remaining health.

In Story Mode: The Destined Rivals, if the player has an Anti-Mike Charm equipped, damage received from enemy Mike attacks is reduced by 75%. 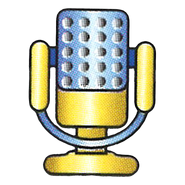 The Microphone being used in Castle Lololo. 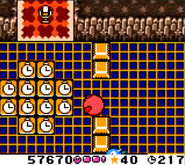 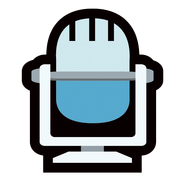