Metroids are an enemy from the Metroid series of games. They make a cameo in Kirby's Dream Land 3 along with Samus Aran (also from the Metroid games). Metroids are biologically engineered parasitic life forms that latch onto and drain the life energy of a victim through an unknown process. They cannot be inhaled.

Kirby finds six Metroids in the second stage of Iceberg. There, they'll erratically fly around and attempt to latch onto Kirby. Oddly, if one does manage to get a hold of Kirby, the Metroid is unable to do any damage to him. To get the Heart Star for this stage, Kirby must defeat all Metroids; because their principal weakness in the Metroid series has always been extreme cold (usually presented in the form of Samus's Ice Beam), Kirby must get the Ice ability and freeze the Metroids. At the end of the stage, if all the Metroids are wiped out, Samus will appear before Kirby without her helmet on to signify the mission was successful, a likely reference to the typical Metroid convention of allowing players to get a glimpse of Samus's face (and usually body) by attaining a fast completion time and/or a 100% collection rating. In exchange for his help Samus will gratefully give Kirby her Heart Star.

This marks the first crossover between the Kirby and Metroid series, two years before Super Smash Bros. came out.

Metroids only appear as a trophy in Super Smash Bros. Melee.

Metroids appear in the game Super Smash Bros. Brawl as an Assist Trophy and collectible trophy. As an Assist Trophy, Metroids erratically fly around the stage, being able to go through it as well. They'll emit a screech every now and then before aggressively charging at a player and latching onto him/her. From that point, the Metroid will damage the player. Soon after, the Metroid will get off of that player and resume its random flight around the stage, soon latching onto another (or in some cases, the same) player. The Metroid will do this a few more times before vanishing in a plume of smoke.

In Super Smash Bros. for 3DS, Metroids appear as enemies in the mode Smash Run. Although they retain the same behavior as an Assist Trophy, Metroids can be defeated in this mode, dropping good amounts of Stat Boosts.

Metroids return as an Assist Trophy again in Super Smash Bros. Ultimate, doing the same thing as they did in the previous two games. However, it can now be defeated with freezing attacks, like in Smash Run. Metroid also appears as a Ace-class support spirit with the ability to KO heal damage.

Battle in World of Light 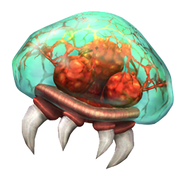 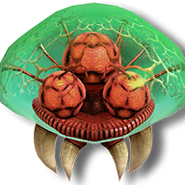 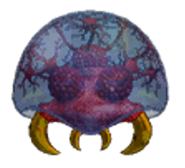 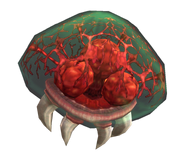 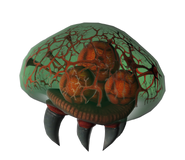