Meteors are obstacles debuting in Kirby Air Ride. They cannot be inhaled.

Meteors have the appearance of a meteorite burning in through the atmosphere, with a semi-molten rocky core trailing a halo of yellow and red. In Kirby's Epic Yarn and Kirby's Extra Epic Yarn, their core is dark blue and has reddish-orange stars, and when the player touches the ! symbol, the meteors momentarily become shooting stars with fabric strings behind them and a bead inside the star that Kirby or Prince Fluff can collect.

Meteors appear during the Flying Meteor Event: Meteors will fall down the sky and destroy everything they come in contact. They will either fall as very small meteors at fast rates or big meteors that fall at slow rates.

In these games, meteors are only found in stages of Space Land, specifically in Stellar Way and Moon Base. They come in three different sizes and are similar to comets. They are not affected by Kirby's nor Prince Fluff's yarn whip or their Weight form, but can be destroyed by yarn ball projectiles or the Tankbot's missiles.

Meteors appear during the boss fight with Star Dream: when its health is very low in its first phase, Star Dream will shoot a huge field of meteors which fly toward the Halberd. Only the big ones can be destroyed.

Meteors reappear in Kirby Star Allies, found in Star Lavadom, Sizzlai Moon, Extra Planet γ, and Extra Planet δ and in the fourth dimension of Heroes in Another Dimension. Meteors cannot be destroyed by the player unless riding the Friend Star while using someone with Splash, Blizzard, or Bluster Star Shots. They are also found in the subgame Star Slam Heroes (taking their design more from a fireball), where the Kirbys have to smack the incoming meteors with a bat. 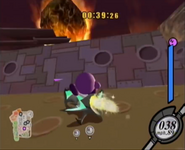 The Meteors are affected by the ! symbol.