Metal is a Copy Ability in the Kirby series, debuting in Kirby: Squeak Squad.

Metal can deal damage by just walking into enemies. Metal is invincible to almost all forms of damage, meaning simple contact is safe to damage enemies. Metal is also immune to the effects of wind and currents, and can pound stakes by performing a Hip Attack. However, Metal has various drawbacks. Metal can still be damaged by bosses and mid-bosses by contact damage, and cannot damage bosses or mid-bosses by contact damage, as it can with normal enemies; it can only damage bosses and mid-bosses by using its new techniques, which are typically unwieldy for dealing with them. While immune to currents, its mobility is hampered due to its weight, making walking and running slow, sliding travel only 2 tiles instead of 4, jumping only 1 tile in height instead of 4, making hovering slower to ascend and faster to descend, and making swimming upward notably tedious by always holding up and a horizontal direction to ascend. Upon obtaining the Metal Ability Scroll, located in the first Treasure Chest in Stage 3 of Jam Jungle, Metal can transform into a smooth ball, making it much more mobile for going down slopes. Metal can be obtained from the Metalun enemy or the Big Metalun mid-boss. 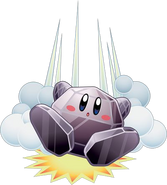 Metal Kirby is immune to magma