Poppy Bros. Sr., Chef Kawasaki, Bugzzy, Mr. Frosty, Jukid, Iron Mam, Bonkers
The Machine Planet Mekkai (originally Mecheye) is the mechanical star of the nearby galaxy in Milky Way Wishes. It is the sixth planet, following Cavius and preceding Halfmoon. It is extremely technologically advanced and well built. The entire star looks hand-made. The entire metropolis is large enough to be viewed from outer space. A lot of the planet features numerous hazards, such as the first room having Gordos and electrical hazards, and the second featuring more Gordos and strong winds. The last room features an elevator which leads to all the mid-bosses, similar to Cavius, except only two are necessary to complete Milky Way Wishes. 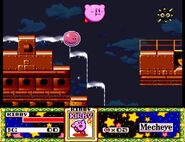