Mega Yin-Yarn is the transformed version of Yin-Yarn in Kirby's Epic Yarn. After Yin-Yarn's apparent defeat, his true identity is revealed to be knitting needles, which use the magic yarn that previously dropped from the yarn body they used as disguise to create this tank-like monstrosity. Kirby fights him in Tankbot form thanks to a metamortex dropped by Meta Knight.

Mega Yin-Yarn looks like a more menacing version of Yin-Yarn with an even more evil look on his face. He retains his hat, holds his two enlarged knitting needles in long lengths of red thread that act as his arms, and has two spiked wheels for feet. His moustache is slightly more jagged-looking and his body is spherical in shape.

Mega Yin-Yarn's main attack is continuously firing missiles from his mouth. He can raise himself up on his bladed wheels and shoot missiles in all directions while spinning when close to defeat, and will swat the Tankbot with one of his knitting needles if Kirby gets too close to him. Kirby can shoot down Mega Yin-Yarn's missiles and shoot his wheels to put him off balance to temporarily stop his missile barrage, but enough missiles from the Tankbot to the villain after he stands up on his needles will knock him down.

After several hits from the Tankbot, the evil sorcerer breaks up into many pieces of thread and his signature button, finally vanquished for good. His destruction causes his knitting needles to drop down in the process and they soon flee.

If Kirby gets too close to Mega Yin-Yarn while he's spinning around, his spiked wheels will hurt the pink hero. 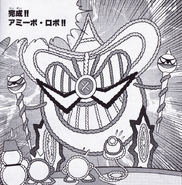 Kirby's Epic Yarn manga (Kirby of the Stars: Pupupu Hero)
Add a photo to this gallery
Retrieved from "https://kirby.fandom.com/wiki/Mega_Yin-Yarn?oldid=317755"
Community content is available under CC-BY-SA unless otherwise noted.