Medals are special items that can be collected and can also be used to unlock new items in-game that can't be unlocked otherwise. In many cases, they are awarded to the player after a stage or sub-game is completed based on the score the player has achieved.

Medals first appear in Kirby's Dream Course, where they are earned based on the player's performance in each course, specifically the amount of shots to get through all eight holes. The player can unlock new features by getting certain types of medals on all courses.

Medals are scattered around all the levels in the game. There are nine in each level and three per stage, with the exception of The World of Drawcia, which has two medals in its one stage. Once Kirby has collected enough medals, they can then be exchanged for various items in Medal Swap, like a new course, a Health boost, a new line color or certain music for the Sound Player. In Rainbow Run, eighteen can be obtained in each level, six in each stage: three for Time Trial and Line Trial. The World of Drawcia is not included in Rainbow Run due to the fact that it only has one stage, and is replaced by the special course. The special course boasts 48 medals, six for each of its eight stages (which have to be bought with medals). Sub-games, on their hardest difficulty, can also give a medal, but these are very hard to obtain. There are a total of 250 medals to be collected.

The medals make another appearance in Kirby Mass Attack, having the same purpose as they did in Kirby: Canvas Curse. They can be found in all stages (except for boss stages), with each stage having either three or five medals that can be found. Items are now unlocked automatically in the Extras, which can be accessed in any level on the upper left part of the touch screen. Based on how many medals the player has, different unlockables can be unlocked such as sub-games and the common Sound Player.

Medals come in a normal yellow-brown color, while there are some that are bright rainbow colors. These are known as rainbow medals, which are said to contain incredible energy. Rainbow medals are important to collect, as they are necessary to unlock the island of Necro Nebula. If the Kirbys miss a medal in a stage, they can visit Daroach's Airship to get a hint from Daroach about its location.

In Kirby's Return to Dream Land and Kirby's Dream Collection Special Edition, medals are awarded after Kirby completes a Challenge stage. He can earn a bronze, silver, gold, or platinum medal depending on his score.

Medals reappear in Kirby and the Rainbow Curse. They are awarded after a stage is completed based on the number of stars Kirby collected. The possible medal types are bronze, silver, and gold. Kirby can unlock Challenges by collecting a certain number of gold medals. When he collects them all, he unlocks the Drawcia figurine.

Medals are obtained like in Kirby's Return to Dream Land and Kirby's Dream Collection Special Edition, though Challenge stages do not return. King Dedede can win his own medals in Kirby: Triple Deluxe’s Dedede's Drum Dash sub-game (as well as the downloadable Dedede's Drum Dash Deluxe).

Medals serve as a sort of achievement list, and give the player Battle Coins. They appears as stars, colored bronze, silver, or gold depending on the difficulty of the task, on a ribbon.

The earliest version of the game had the "Not in Multiplayer" notice mislabeled as "Not in Battle Mode." 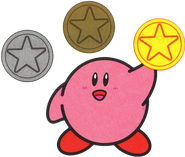 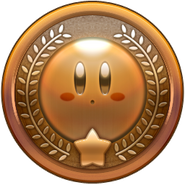 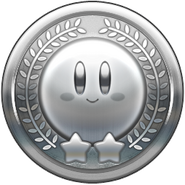 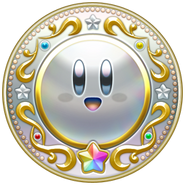 Kirby and the Rainbow Curse
Add a photo to this gallery 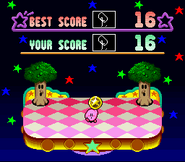 Kirby Mass Attack (stars)
Add a photo to this gallery
Retrieved from "https://kirby.fandom.com/wiki/Medal?oldid=335323"
Community content is available under CC-BY-SA unless otherwise noted.