Mecha Kawasaki is a boss in the Kirby series, debuting in Kirby's Return to Dream Land.

Mecha Kawasaki is a titanic robot designed in the likeness of Chef Kawasaki. It is egg-shaped with a brown face and hands. It has two orange eyes, a white jaw, and red feet. The robot wears mechanical chef's attire, complete with a star-adorned toque, a blue shirt, an orange tie, spiked collars on its arms, and a refrigerator-like apron adorned with a duck image. It carries a frying pan and a ladle.

Underneath Mecha Kawasaki's exterior is a steel skeleton. Beneath its face are a pink visor and yellow lips. The toque is revealed to be a smokestack when the exterior is stripped away.

Mecha Kawasaki is the boss of Mission 2 in the Scope Shot sub-game. It wanders back and forth across the sandy stage, waving its arms. It occasionally tries to protect its body from the player's shots by holding its frying pan in front of its chest. The robot also spins its ladle at blinding speeds, deflecting any shots that hit it. Destroying the robot's frying pan and right hand will disable these techniques.

Mecha Kawasaki can open its apron to reveal a missile, then fire it out of its toque. These missiles may take the form of a fish that swims back and forth toward the player, a meat bomb that bounces along the ground toward the player, or eggs that fire all around with one moving in the player's direction. All of these missiles stun the player for a short time if they hit him. If the missile is destroyed before it can be fired, Mecha Kawasaki will briefly falter, leaving it open to attack.

After Mecha Kawasaki has taken enough damage, the robot's weak point will appear inside its apron. One shot will be enough to destroy the machine, causing it to explode. 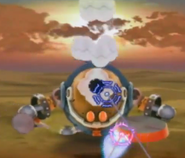