Mech Flotzo is a large enemy in the Kirby series, debuting in Kirby: Planet Robobot.

Mech Flotzo is a giant red octopus wearing a diving helmet. The enemy has four arms and two tentacles, and wears a permanently grouchy expression. Its helmet has a metal spigot protruding from its front. Mech Flotzo is a variant of Flotzo.

Mech Flotzo first appears in Stage 1 of Overload Ocean. It dwells in water. When Kirby approaches, the enemy attacks. Some Mech Flotzos wait in water and spit blobs of ink at the hero. Others leap out of the sea in an attempt to land on him before jumping back into the water. Regardless of the attack used, Mech Flotzo can hit any plane Kirby traverses. The octopus is rarely situated on a tangible plane, so in most cases, Kirby should try to avoid it rather than fight it.

Mech Flotzo is immune to all attacks except those used by Robobot Armor (or, in Meta Knightmare Returns, Galaxia). If one such attack hits the enemy, the octopus explodes, dropping stars and/or food.

Mech Flotzo's name comes from the words "Mech" and "Flotzo," referencing the enemy's mechanical theme, and for being a variant of Flotzo. 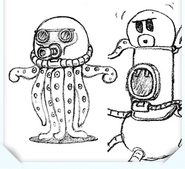 Mech Flotzo jumps into the foreground.