Master Pengy is a common penguin enemy from Kirby's Dream Land 2 that gives the Ice ability when inhaled.

Master Pengys are small, penguin-like creatures. They are white on their belly and forehead, a slightly lighter color on their flippers, beak, and the underside of their wing-like arms, and black everywhere else. Master Pengy has an almost elliptical form, as its stomach protrudes out from its body, and its head possesses a rounded shape. Likewise, its beak appears wide and puffy, with the bottom half being approximately twice the size of the top half. It also has black eyes, situated close together above the beak and almost reaching to the top of its forehead.

When a Master Pengy sees Kirby, it will start to chase him. It does this by sliding on its belly; however, it cycles between doing a small slide, then taking a short pause. Once the Master Pengy is close enough, it will take a deep breath and prepare to shoot ice at Kirby. This ice attack consists of numerous crystals shot at long range, and if Kirby is hit by this move, he will be temporarily frozen into an ice cube. Master Pengys are able to blow ice for a few seconds, but after that, they will pause, chase Kirby again, and so repeat the cycle. 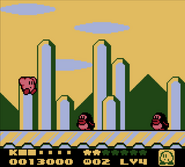